It’s a sign of the times I guess. South Australia is historically a very dry state and it’s certainly not getting any wetter.

Whether it’s global warming related climate change, a natural cycle or whatever; it doesn’t matter – we simply don’t have enough water here and we place far too much pressure on what few water resources we have.

Adelaide’s first desalination plant is currently being constructed at Port Stanvac – ironically the same site as the old oil refinery that shut down operations a few years back – which was one of the ugliest things I’ve ever seen; a real blight on the landscape and coastline. 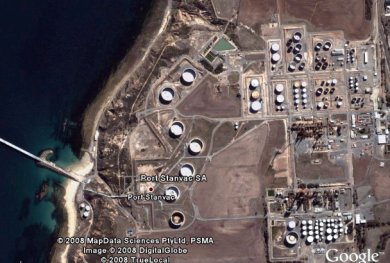 The $1.1 billion pilot project will deliver up to 50 billion litres (around 13 billion gallons) of water annually – which is around 25% of Adelaide’s water supply needs. The plant will be expandable up to 100 billion litres a year. Given the dire situation with water supplies, the desalination plant has been fast tracked and will be functioning six months ahead of schedule, at the end of 2011.

How does desalination work?

The technology to be used at Port Stanvac is reverse osmosis. High pressure is used to force the sea water through a membrane which acts like a sieve, removing salt and other nasties. After further treatment, it will then be piped directly and also into reservoirs.

Desalination is not a panacea

It’s awesome technology, but from what I understand it’s very, very energy intensive, so I hope our state’s commitment to renewable energy has factored in the amount of juice this plant is going to use. I also hope this doesn’t lull the people of Adelaide into a false sense of water security. There will be an impact from this (energy, resources and all that salt will have to go somewhere) and we need to continue to be water wise. If the government can spend 1.1 billion on this, I can’t see why they couldn’t have invested that money into rainwater catchment to be attached to every roof possible in the city.

.. but then, they wouldn’t have control over that water :). Control water, control life. However, taking the tin foil hat off for a moment; anything that takes the pressure off the Murray River with minimal impact on other areas is a step in the right direction.