If you haven’t heard the term “Peak Oil”; brace yourself as you’ll be hearing it a lot more in the years to come. It’s been a whispered term for many years, much like “global warming” was back in the 60’s. 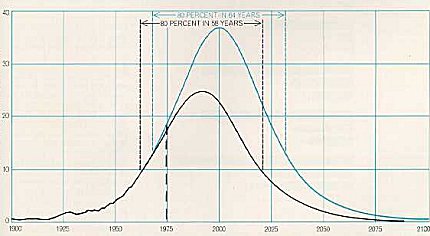 (From the Scientific American book – Energy and Power 1971)

Dr Hubbert also flagged with the world the issue not only of declining oil production, but the increasing cost associated in extracting what oil remained after the “low hanging fruit” had been picked.

There is no doubt that the cost of oil production in recent times has been huge – not only in the exploration and production itself in financial terms; but also in terms of environmental damage caused. Added to that has been the huge military expense and associated human suffering caused through wars that have been pushed on the public by their governments as being issues of national safety rather than their true motivation – control of oil reserves. The war in Iraq is a classic example of that.

Dr Hubbert was ridiculed by many when he released his research; but his predictions appear to have come true. USA oil production did indeed go into rapid decline around 1971.

The  Organization of the Petroleum Exporting Countries (OPEC), a cartel of countries whose members sit on around two-thirds of the world’s oil reserves have been in a state of public denial about peak oil theory for many years; but that seems to have changed recently also.

In the latest issue of OPEC’s publication; “OPEC Bulletin”  (November/December 2006), on page 62 is an article by Dr Shokri Ghanem, Chairman of the People’s Committee, the National Oil Corporation (NOC) of Libya; discussing not the “if” of peak oil occurring; but “when” and he acknowledges that we may already be in that timeframe.

Fact: we are consuming more oil globally and the trend will continue

Fact: it is not a renewable resource in relation to our consumption levels

Fact: countries go to war over control of oil reserves

Fact: oil consumption has a negative impact on the environment

Fact: gas at the pump continues to, generally speaking, increase in price

Fact: many plastics and other trappings of the modern world are made from oil

Fact: the world is running out of easily sourced oil; i.e. production using current technology has peaked, and what oil is left will cost more to pull out of the ground using methods most likely to be even more unfriendly to the environment.

Paints a rather grim picture for our oil addicted society doesn’t it? If we’re willing to invade a country now for oil, how much more aggressive will we be when supply really gets tight?

How does food get to your table? Do you grow it in your yard, or is it trucked in to your supermarket? How do you collect it; do you walk to the supermarket or drive? How do you get to work?

How many affordable alternative energy vehicles are now on the market?

When the Iraq war and other geo-political issues pushed the price of oil to record levels; people stopped buying SUV’s. Within a couple of weeks of a drop in prices; they went back to buying them again. It just goes to show how little we learn. We had a taste of what really expensive gas was like, yet as soon as the pressure was backed off a little; we went straight back to our previous oil-greedy ways.

We won’t learn, oil will have to run out or become so horribly expensive that only few can use it to any degree. What will it cost? How much will it impact on the cost of other items? How many more people will have to die and how much more will our environment suffer while we squeeze out the last viable drop of oil that the planet has to offer?

These are important issues to think about – don’t rely on governments to provide the answers to a world without oil as they’ve all been in denial for way too long. Yes, there are renewable/alternative energy programs in place; but given the major role that oil plays in our lives; permeating just about every aspect; whether these new, cleaner technologies can be rolled out broadly before we hit the real crunch is something I’m not very confident of.

The time is now to start thinking about and making changes to the way you live so your life is not so oil-centered. Remember that a lack of oil extends far beyond just not being able to drive your car – so many other products, services and industries are based on oil.

If you’d like to read the OPEC bulletin article, you can download it here (PDF – around 5 megabytes)

As a first step towards reducing oil consumption (and saving money), pick up some handy gas saving tips