We can learn a lot from animals – the species currently on this planet and those made extinct in the past.

A classic example of the finite nature of Earth’s natural resources is the case of the Passenger Pigeon of North America.

The Passenger pigeon was once considered to be one of the most prolific of the world’s birds. It’s estimated that at their peak, the population of Passenger Pigeons was around the 5 billion mark. During their mass migrations, flocks a mile wide and 300 miles long could be observed. It’s estimated that this species represented 25 to 40 per cent of the total bird population of the United States.

How long did it take to go from 5 billion to zero? Just over 100 years, with the worst of the decimation occurring in a twenty year period. In Petoskey, Michigan; up to 50,000 birds were killed each day over a five month period. 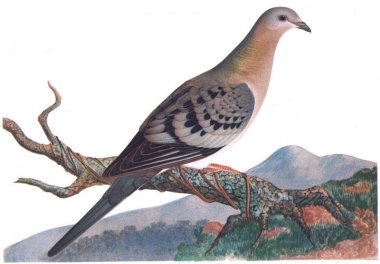 In 1857, a bill was put forward seeking protection of the pigeon, but it was rejected because they were “Wonderfully prolific, having the vast forests of the North as its breeding grounds” and “no ordinary destruction can lessen them”.  By the middle of the 1890s, the passenger pigeon was functionally extinct.

The extinction appears to have been purely caused by man – partly due to loss of habitat by European settlement, but mostly as a result of pigeon meat becaming sought after as a cheap food source for slaves. The last known Passenger Pigeon died in captivity in 1914.

Sometimes animals and plants can seem to be in abundance to us. It seems an impossible notion that we could drive some species to extinction. It’s a singular view and leads us to think “I’ll only take a few” – but when a few are taken by many, or many taken by a few; nothing of any value to us on this planet is inexhaustible.

We certainly need to approach our dealings with the natural environment with the lesson of the Passenger Pigeon close to mind and wherever possible, take nothing but photographs and leave nothing but footprints.