The Australian government has coughed up, or rather pledged, $3.7 billion into projects to save the Murray-Darling Basin. This river system is an incredibly important source of water in Australia. It’s thousands of kilometers long; runs through several states, irrigates Australia’s food bowl, supplies cities with drinking water and sustains a variety of ecosystems.

Many parts of it are now also on death’s door; partly due to climate change and other forms of human related abuse. This isn’t a new development; I remember the warning bells being sounded when I was a kid nearly 30 years ago.

Of the 3.7 billion, $600 million of the funds will be utilized on the lower lakes of the Murray river in South Australia, which, being at the tail end of the river system – are in an awful state.

To give you some idea of the water situation here; take a look at this pic: 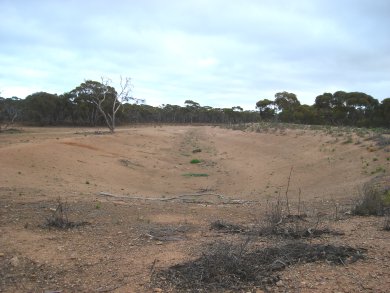 That’s of the dam on my property. It has a 600,000 gallon capacity and it’s been dry for two years. All that’s at the bottom of it are a few carcasses of desperate sheep that became stuck in the mud  before it finally dried up totally. Even with it being winter which is the wettest time of the year here; and a fairly recent downpour, not a drop made it into the dam as the ground is just sucking up any moisture that hits it.

Some of the lower lakes on the Murray River are starting to look the same – beautiful areas such as the Coorong, featured in the Australian classic film “Storm Boy” are drying up fast – and with a brutal summer ahead; things are grim.

Let’s hope this cash is used wisely and it’s not a case of too little, too late. Water is become an increasing challenge in many parts of the world. We can all do our bit by implementing some simple water saving tips for the home and garden.