I’ve been posting headlines regarding climate change for nearly 5 years now via another site of mine, Carbonify.

News about island nations being threatened by rising seas has been common over that time. A country that appears regularly in regard to this threat is the Maldives. The Maldives consists of 1200 islands spread over 90,000 square kilometers. 200 of those islands are inhabited.

The nation’s highest point is only 2.4 metres (8 feet) above sea level and much of it is only 1.5 metres (5 feet) above. When I first started writing about it in 2007, the belief was the nation could be swamped within our lifetime.

“Within our lifetime”, “in the future”, “in the years ahead” can sometimes make a threat seem something that can be put off to a later date to deal with. Our logical minds know the sooner it is addressed the better, rather than an attempt at the last possible moment. Too often that moment comes sooner than we anticipate.

For the Maldives, the future is now as the inundation has already begun. According to an article on the Sydney Morning Herald, 14 islands have already been abandoned due to erosion by the sea. Three inhabited islands are currently being lost a year.

They say a picture is worth a thousand words – and this image really drives home just how much of a threat rising sea levels are to the Maldives. The image is of Malé, capital of the Maldives. 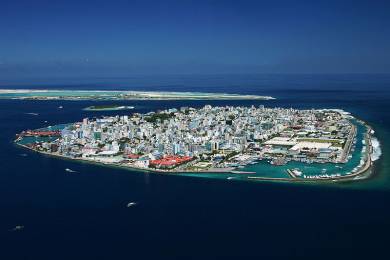 I’ve seen photos of the Maldives Islands before, but they were mostly tourist shots. My jaw hit the ground when this image appeared on TreeHugger. That is what the capital looked like 7-8 years ago – it’s not hard to imagine what even small sea level rises will do to it, not to mention the effects of storms on top of that.

350,000 Maldivians may soon be looking for a new home. The nation’s government is already socking away funds to finance the acquisition of land for relocation of the country’s population.

The Maldives’ President is angry about the world’s inaction on climate change and assisting nations that need help. That photo gives us a better understanding of why.

Addressing climate change isn’t just about the impact on future generations – it’s about our generation too. While the Maldives may be doomed, there are other countries and communities within nations that might stand a better chance if we take appropriate action now.