I think my father has always rued the day he planted bamboo in the front yard of the house I grew up in, much the same he regretted planted prickly pear cactus :). I love my dear old Dad, but what the heck was he thinking?

The bamboo became somewhat of a monster, sending out runners and shoots throughout much of the yard, dozens of feet away from the main plant. These young shoots were like spears that threatened anyone in bare feet.

No matter what he did – hacking, digging, poisoning, depriving it of water; this thing just couldn’t be killed – in fact each attempt seemed to just spur it on.. 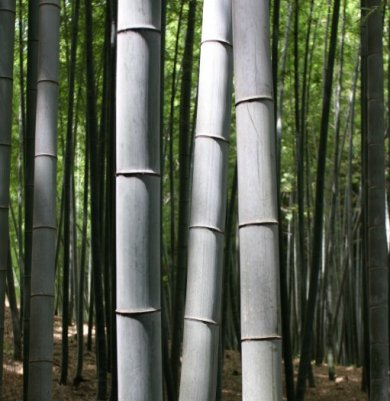 Bamboo is a type of grass of which there are around  1,400 species. I don’t remember the type we had but I think it was a 4 letter cuss word judging by what my father used to mumble each time he looked at it :). The attributes vary between species, but generally speaking it is pest (and dad) resistant, can grow in poor soils and in comparison to other crops, requires little water.

When we think of bamboo, we usually think of Asia; but of all the species, around 900 are tropical and 500 are temperate. North America has species of bamboo in the Eastern and Southeastern United States. There’s even several species native to Australia.

Bamboo is the world’s fastest growing plant and some species of bamboo can grow up to a foot a day in the right conditions. It’s this amazing growth rate coupled with the “spear” type shoot I mentioned that led it to unfortunately also being used as a torture device; the methods of use I won’t go into.

On a more positive note, like industrial hemp, the bamboo plant has an extraordinary range of uses. Here’s just a few:

.. and that’s really only just scratching the surface. I have a bamboo cutting board that’s proven to be incredibly tough and particular resistant to becoming whiffy, no matter what I food I use it for – including onions (usually a no-no with wood-type boards).

Another important use for bamboo is food. The shoots are used in many Asian countries as a vegetable – sometimes eaten raw, or steamed and boiled. I can’t say I’m a big fan of it, but given a choice between a bowl of bamboo shoots and a bowl of twigs, I’d certainly opt for the bamboo. China makes beer from bamboo, which I’ve read is quite palatable. Given that, I’m thinking it may also be useful in relation to the production of cellulosic ethanol.

There also appears to be some medicinal applications for bamboo – and even perfume is being made from the stuff!

Bamboo – you can wear it, you can eat it, you can build with it. Bamboo may increasingly replace plastics and wood products – what a marvellous gift from nature!

Consider bamboo alternatives when purchasing items – despite some ongoing debate about the exploitation of bamboo and associated production processes of bamboo goods, it’s readily renewable, sustainable and still seems to have a lot less environmental impact than chemical-ridden crops, destruction of old growth forests and petroleum-derived materials.

Bamboo greenwashing avoidance tip: When clothes that proclaim they are made from bamboo, check to see what proportions are used. You will pay more for bamboo based clothing, so you want to ensure that what you’re getting has a good level and not just a couple of percent. In terms of textiles, new lower-impact technologies are increasingly being used to turn bamboo into fiber suitable for clothing; however, for even lower-impact clothing, consider hemp-based textiles  instead.

Not sure what greenwashing is? It’s where companies exaggerate the environmental benefit of a product in their marketing . Learn more about avoiding greenwashing.