Ugg boots, made from sheepskin, are synonymous with Australia/ New Zealand and have been one of our best known exports. They are so popular, many companies overseas have emulated them.

However, if you buy ugg-style boots (and I use the term “ugg” in its generic sense, not in relation to the companies that own the registered related trademarks), it may not always be sheepskin you are getting it seems. Worse still, the animal may not have been dead when it had its skin removed.

I really didn’t want to write this article for reasons that will become clear, but as I know ugg boots are not only popular here in Australia but also in the U.S., Canada and the UK, I thought readers should get a heads up if they are buying boots imported from elsewhere – and by writing it, it will help drive a lesson home for me too.

A report on TreeHugger states some imported ugg style boots are made from racoon dogs and some breeders of this animal have been known to skin the poor animals alive.

IMPORTANT NOTE: The TreeHugger article also links to a video of an instance of racoon dogs being skinned alive. I strongly advise readers to *not* watch it. I’m pretty sure I saw this footage a few years ago, but I wasn’t aware of the connection to this style of boot. I’ve seen a lot of terrible things in my life, and this is right up there as being among the very worst. I wasn’t even game to take a quick look in case it was the same video. I never want to see it again. 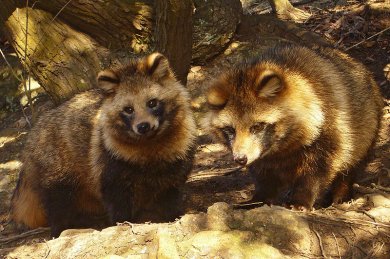 Raccoon dogs are cute creatures, but cuteness shouldn’t be a benchmark for concern and I respect some frown upon animal leather in any form.

The usual animal welfare and environmental issues relating to leather aside, I don’t care (unless it’s an endangered species) if the boots are made from sheep, racoon dogs, rats or roaches to be quite honest; but no creature should suffer such a fate, nor bred and lose its life just for its skin.

I have a pair of “sheepskin” boots that came from overseas as there were no locally made products available in my area at the time and I won’t buy footwear online. When I bought them, I assumed certain things – that they were sheepskin, that the animal was dead when it was skinned, that it was killed in a “humane” manner and that skin used was a by-product – with the animal primarily utilized for meat.

I remember now the old saying about “assume” and really, I should know better as I’ve so often said to ” go beyond the label”. Actually, looking at the label in my boots, it just says “leather” and “wool fleece”. Leather? What kind of leather? What the hell am I wearing? I really have no idea and it never dawned on me it could be anything but sheep leather. I was in fantasy land – I needed/wanted boots. I got my fix.

Perhaps given their questionable origin, I should throw them away in disgust? No, that would be a waste as they are reasonably new. An animal gave its life so I could have these boots and like the last pair, I will wear them until they fall apart. When they have worn out, I may even keep one as a reminder – just as I have an unpleasant reminder every time I put them on now.

This “sheepskin” boot issue is just another example of how challenging being an ethical or at least a trying-to-be-ethical consumer can be; there are so many minefields to navigate in purchases – even simple ones like this that I shouldn’t have overlooked. Labels on clothing and footwear can’t always be relied on either as they are sometimes removed or replaced with something more “palatable” to consumers.

It’s reports like this that again raise the thought in my mind there is just too much bad in the world nowadays casting a shadow over the good. We’re often unwitting; or as in this case with me, somewhat complicit, participants in creating the darkness.

I often wonder if our species is totally, utterly and irreversibly screwed. I really hope this isn’t the case. In the meantime, another lesson has been learned and onwards I guess; either towards a better world or over the brink and into the abyss.