I’m a self-confessed treehugger. I have literally hugged trees. The first time was during my late teens after a couple of years of being stuck in a city. I finally got out into the country and hugged the first tree I came across; I was just so relieved to be away from the concrete and steel.

Fast forward 20 years and I’ve been privileged enough to finally acquire a patch of dirt of my own with thousands of trees. I haven’t hugged them all as it’s far too time consuming :).

The land was very cheap as it’s not much good for most traditional agricultural/commercial purposes due to poor soil and little rain – it’s reasonably harsh country, but to me, it’s an invaluable chunk of Australia. Last cleared in the 60’s, the bush has fought back and reclaimed most of the block – and I aim to keep it that way.

Here’s a shot of sunset last night. A camera (more accurately, my camera skills) doesn’t do the beauty of moment justice. 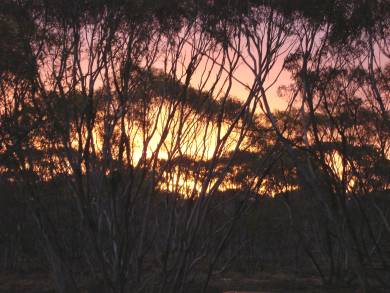 I’m constantly in awe that these Mallee trees grow with so little rain, endure temperatures ranging from below freezing to above 45 degrees celcius (113F) in the shade and have next to no nutrient-rich soil – much of the ground is limestone. They thrive in all that for many, many decades. But there’s something they can’t resist – man. Much of this state (South Australia) has been denuded of Mallee trees in under 200 years.

While I’ve had the block, I’ve also often wondered what the tree to person ratio was globally given how many trees we’ve destroyed in this part of Australia.

They play such an important role in our lives – shelter, food, fuel, furniture, paper, cleaning up the carbon dioxide our cars and industries spew, providing us with oxygen; the list goes on.

The answer – an estimated 61 trees per person.

According to this article and based on NASA data, in 2005 there were over 400 billion trees on this planet and there’s over 6 billion of us. Given everything we use trees for, that’s a piddling amount and I suspect a similar number crunching exercise done in a decade from now would show it to be less again (unless we wake up).

Unfortunately, At least 80,000 acres (32,300 ha) of forest disappears from Earth each *day*! It certainly doesn’t need to be this way as unlike oil or coal, trees are an easily renewable resource.

In 1966,  Ronald Reagan, who went on to become President of the USA  reportedly said the following when opposing an expansion of Redwood National Park: “A tree is a tree. How many more do you have to look at?”

Do you have a spare spot in your back yard? Consider planting a tree, or get active with groups that plant trees on public lands. If time isn’t something you have but you can spare a few bucks, consider sponsoring  the planting of trees or the financial support of tree planting groups. A few respected organizations include:

Tree sponsorship could also make a great gift for someone you care about.

We really need every tree we can get.