If you do a bit of camping and the idea of going for days without a scrub or bathing in cold creeks isn’t for you – consider a solar shower bag.

I’ve been using one of these for years now and as long as you’re not in a place that regularly experiences temperatures below around 15C (60F) during the day; this could be a good solution for saving gas … and water. In addition to financial savings, that means there’s environmental benefits too.

A solar shower bag is just a bag that’s black on one side – you fill it with water, lay the bag flat in the sun with the clear side facing up (or so say the manufacturers – I use mine with the black side facing up), wait a couple of hours and the water will warm enough to shower under, even in mild winter conditions as long as it’s sunny.

While the water temperature won’t be steaming hot during the colder months; it certainly beats a cold shower, none at all or chewing through a ton of gas or wood to heat water just for your daily tub.

I put my solar shower bag on a black rubber mat – this helps protect the bag, speeds up the heating process and also acts as an insulator. 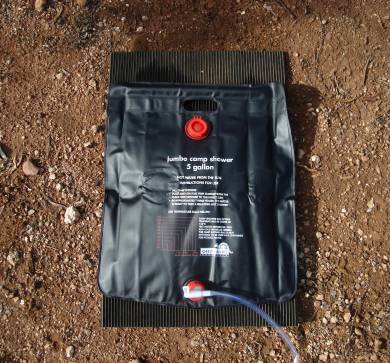 I find that on days that are a little cloudy or particularly cold, I just add in a cup of boiling water that I’ve heated on the camp stove or potbelly stove just before I shower to give it a little temperature boost.

During the cold months, the initial temperature of  water is much colder, which requires more energy and more gas; so the less you have to heat via a gas stove, the better. Using the solar shower bag and prior to installing a potbelly stove, I only consumed about 2 pounds of cylinder gas a week during winter for all my cooking, coffee (which is mission critical stuff) and shower water heating needs – and that’s with showering daily.

How does the bag save water?

The more water you put in the bag, the longer it takes to heat up; so this encourages you to only add in what you really need. The bag I use holds 5 gallons, but I’ve never tried filling it to capacity. I only put around three quarters of a gallon of water (just over 3 litres) to a gallon in. Given the bag is so large, the greater surface area compared to the level of water allows it to heat up quite rapidly on a sunny day.

The shower head is pretty small so water doesn’t drain out too fast and I can get a good wash out of the three quarters of a gallon using the “Navy method” – wet myself down, turn off the water, lather up, water back on and rinse. Every drop of water counts out in the bush and I often feel guilty when I’m back in the ‘burbs that the amount of water I use in a single shower while in “civilization” is more than what I use while in the outback for an entire week!

Carrying propane gas and water are two major bugbears for many campers, so the solar shower bag helps decrease the amount of both you’ll need and also lessens the amount of fuel you’ll burn carrying those items to your camping destination – every additional pound of weight counts when it comes to saving gas.

A word of warning – over summer, the water will get *incredibly* hot; so always test before sticking your whole body under it.

Unfortunately, solar shower bags are made of plastic, but if you take good care of your bag by not placing it directly on rocky ground, overfilling or throwing it around; you should be able to get years of camping seasons out of one. After the end of its serviceable life, depending on what has failed, don’t throw it out; try to repurpose it. I always keep the connections, shower head and tubing from old bags as spare parts.

By the way, be sure to drain it out properly at the end of a season to prevent icky things growing within and before using the solar shower bag for the first time next season, give it a good flush with very hot (but not boiling water).

Solar shower bags are available at most camping stores or the camping section of many major chain stores for around ten bucks.

If you’re looking to heat water for your home on a slightly larger scale, check out my guide to solar hot water systems.