One of the things I love about solar power is not only the clean, green renewable energy aspect and gaining independence from the grid, but also their relative simplicity in terms of the number of components needed to create electricity.

All you need is a solar panel, some wiring, a solar regulator (aka charge controller) and a deep cycle battery for storage in some cases – and an inverter, which is a critical component in turning power from the panel into juice you can use in the home.

What is an inverter?

The output from a solar panel is usually 12 or 24 volts direct current (DC). While there’s many appliances on the market that can run on 12 volts (mainly camping and off road gadgets), the “normal” appliances in our homes need a different type of juice – 110 or 240 volt alternating current (AC) depending on the country you live in. The magic box that can achieve this conversion is the inverter.

My understanding is essentially it’s in the movement of electrons. A flow of direct current (DC) electricity is continuous in one direction, the current in AC electricity alternates in direction.

Past that explanation, you’ll need to consult someone more familiar with electricity than me, but AC is used for mains supply primarily because the voltage can be transformed and carried over a longer distance with less energy loss.

The odd thing is that many AC appliances actually run on DC. While they plug into an AC outlet the internal circuitry converts this into DC.

I’ll leave it at that before I confuse myself (and you). The bottom line is, you need an inverter to run appliances designed to work with mains electricity :).

A note on cheap inverters

I bought a cheap inverter for my trips into the outback. It’s only rated at 150 watts, but that’s enough to power a notebook and lights running off 240 volt (mains supply current in Australia).

However, the inverter gets quite warm, even when running a 5 watt fluorescent and that heat represents energy loss and wasted deep cycle battery draw. Plugging in my notebook really makes it heat up and in summer it will often trip out the inverter.

I discovered that this is common when running appliances that have adaptors off cheap inverters. Mine is ok in a pinch, but for serious off grid work such as powering a house where you’ll be using more than a couple of hundred watts at any given time, don’t skimp on an inverter as it will cost you more in the long run; go for a true sine wave inverter.

Bear in mind too that if you’re buying a full solar power system, renewable energy rebates offered by many governments can substantially reduce the cost. 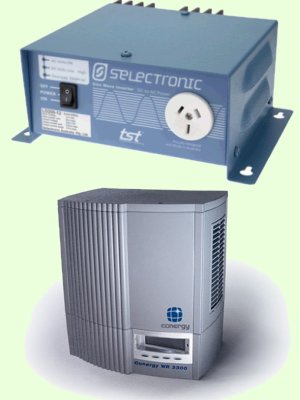 Sounds like surfing jargon doesn’t it? A true sine wave inverter is the best choice if you’re powering sensitive electronic equipment or reliant on a steady flow of “clean” electricity. True-sine wave inverters crank out electricity that is identical in quality (and sometimes better) than the power you draw from a mains supply.

The other type of inverter, and it’s the type I have, is a modified-sine wave. Unlike true sine wave, which appears as a smooth set of waves when viewed with an oscilloscope, a modified sine wave appears as being choppy and squared – and that represents the quality of the power. It’s the poor cousin of true sine wave.

When selecting a true sine wave inverter, you also need to ensure you buy the right one and depending on the type, you may need an appropriately accredited installer to do the work.

A mains grid inverter is one where you’ll not only be drawing power from the panels, but any excess juice being produced at a particular point in time is fed back into the grid – i.e a mains grid connect solar power system. You’ll definitely need a licensed installer to perform the work given the voltages involved.

A SAPS inverter is one for a Stand Alone Power System – i.e. an off grid system. These basically just plug into your deep cycle battery bank, so you can install them yourself; just take heed of the instructions to prevent any nasty, ahem, shocks.

The size of the inverter you’ll need depends upon your peak power loads. If you add up the wattage of all the appliances you’d be using at the same time, that will give you an indicator. You can also use this solar power system builder – based on your input, it will tell you the size inverter, panels, batteries etc. you’ll require based on your needs.

Important note – electrical appliances often use far more juice when they are firing up than in normal operation; up to 3x as much. For example, a 200 watt rated appliance might use up to 600 watts for a few seconds when it is switched on; so you’ll need to ensure the inverter you buy can handle high draws briefly.

If you’re buying an inverter for anything else apart from light use, it’s really best to talk to an expert in renewable energy first – guessing what you’ll need can wind up being very costly exercise.