Here in Australia, we take the humble clothes line for granted. You’d be hard pressed to find any house in this country without one. While many of us have clothes dryers (around 62% of households); they tend to be used only when there’s been extended wet weather.

We generally view the clothes dryer as a luxury rather than an essential. In a 2002 survey by the Australian Ministerial Council on Energy, only 20% of clothes dryers in Australia were reported as being used at least once a week. I guess that’s one of the positives of living in “The Sunburnt Country”.

It came as a great surprise to discover that in some parts of the world – particularly in the USA; line drying can be the exception rather than the norm, with gas/electric clothes dryers being the preferred method.

Figures from the USA department of energy show that around 90% of American homes have a clothes dryer, with the average family using it an incredible 400 times a year.

Aside from the obvious reasons for the absence of a clothes line, such as apartment dwellers not having the space; the reasons for other households in the USA can be a little more obscure – such as neighborhood associations banning line drying  under restrictive convenants for aesthetic reasons.

While a clothes line may never be a work of art; I think in this day and age of environmental awareness and issues relating to climate change; banning line drying from back yards is .. well… just plain silly.

Like some states banning the collection of rain water as someone else “owns” it – a bit of civil disobedience might be called for. At the very least, I’d encourage folks to lobby their neighborhood association to reverse such a ridiculous restriction.

Using electricity to create heat is always an energy intensive exercise; so clothes dryers do tend to be electricity hogs. According to the California Energy Commission, the average clothes dryer will cost around  $1,500 to operate over its life span.

Environmentally speaking, the energy consumed by a clothes dryer can be anywhere from 1800 to 5000 watts per hour, or 1.8 to 5KwHr. Given that 1.5 pounds of carbon emissions per kilowatt hour are generated in the production of electricity by a coal fired power station (give or take a bit), over a year this comes to a considerable amount.

The benefits of a solar clothes dryer, aka a clothes line are many; here’s just a few:

When I was growing up, the clothes line was a steel behemoth (which used to swing from it when my mother wasn’t looking) and there were few options available. These days, they are lightweight, quite cheap to buy, long lasting and come in all sorts of configurations for indoors and outdoors use. 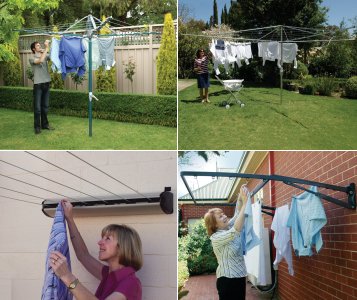 Australians may have a greater affection for clothes lines than most due to the famous “Hills Hoist” being invented here. Back in the 70’s one could be found in just about every yard. The Hills hoist is a rotary clothes line that allows for a ton of clothing to be hung out. Modern models are even collapsible.

A clothes line doesn’t have to take up a stack of space permanently. The retracting models occupy a very small area, and the retracting line is stored in a tidy box you can mount on a wall or post.

Again, requires very little space. The folding frame models are neatly stashed away when not in use; freeing up the area for other activities.

Even if you’re an apartment dweller or where the weather isn’t the best,  there’s all sorts of indoor models to choose from – here’s a few models:

In Europe, many homes have indoor clothes lines that drop from the ceiling.

While the thought of having wet washing inside the house mightn’t be overly attractive, an indoor clothes line can be a very handy thing to have around in order to help minimize dryer use.- we use ours regularly.

While lessening the reliance on clothes dryers and opting to line dry where possible isn’t going to defeat rising carbon dioxide levels in itself; it’s just one of the many little things we can do that collectively can make a difference.