The issue of light pollution sprang to mind again tonight after reading about some cosmic events I’d really like to see. Sadly, many people never even get to see the true night sky due to light pollution.

Imagine what night time on this planet would have looked like from space just a few hundred years ago. It would have been very.. dark.

To give you some idea of just how much of the modern world has spread it’s tendrils across the planet, check out this image of the earth at night: 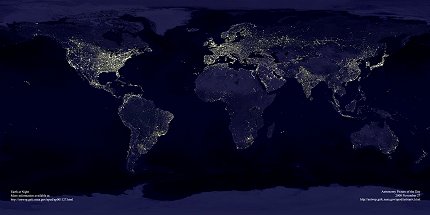 A larger, clearer representation can be viewed here (will open in a new window). Even though places like Australia seem to have very little in terms of night lights; the larger image shows in better detail that even this country with it’s relatively small population does seriously light up the night sky.

This above image is a composite image of hundreds of pictures made by DMSP satellites; released by NASA back in 2000. Given the pace of modernization in developing countries and continuing urban sprawl elsewhere across the planet in the last 10 years, I hate to think what the same image would look like now. I’d also hate to think how much electricity usage that snapshot represents.

Do you live in a city? To understand the effects of human generated light; make it a goal to at some stage head out to an isolated area on a clear night – get as far as you can from any major light source. Then look up to the skies – I guarantee you’ll be awe-struck at how beautiful our small section of the universe is. If you get a particularly clear night, it’s almost as though you can reach up and touch the stars.

To get an idea of what you’re missing out on if you’re living in a city or even a relatively small town – view this image (will open in a new window).

Our modern world steals these breathtaking sights from us – this light pollution is also known as photopollution or luminous pollution.

Sadly, aside from light pollution, at the rate we’re going with airborne pollutants and dust in the atmosphere, even viewing the stars from remote places won’t have the clarity that it does now. I often wonder what the night skies looked like prior to the industrial revolution.

Light pollution is also a symptom of another serious problem affecting the entire planet – global warming. To create light takes electricity; and electricity is generally generated by the burning of fossil fuels, which increases carbon dioxide levels in the atmosphere, which in term contributes to global warming and climate change.

Some of the other environmental impacts of light pollution include:

– Some nocturnal birds use the moon and stars for navigation during their migrations; and they can become disoriented when flying through brightly lit areas.

– Female sea turtles shy away from areas with bright lights, which interrupts their nesting patterns. Newly hatched turtles are also drawn to lights, so instead of heading to the ocean, they often head inland instead.

– Other reptiles and mammals are believed to suffer from bright lights in relation to feeding and mating habits.

– It’s recently been discovered that light pollution can increase air pollution. Light from our cities can destroy nitrate radicals that form at night and help to cleanse the air.

While our planet will likely never return to it’s natural state of darkness at night, there is something we can all do to help with issues relating to over-illumination. It is a serious problem, accounting for somewhere in the region of two million barrels of oil per day in energy wasted in the USA alone.

What you can do:

– Light only where needed
– Don’t overlight
– Don’t waste light
– Shine light downwards, using shields and reflectors
– Light only when needed – use sensors where possible
– Light with energy efficient sources such as LED’s and compact fluorescents.

There’s not just the environmental aspect – by cutting back on lighting and using light wisely, you’ll also save a wad of cash.