Flicking a switch to turn on a light is something most of us take for granted, but in many places, there are no switches and no electric lights.

While coal fired power generation certainly has a marked environmental impact, for hundreds of millions of people lighting isn’t powered by electricity, but in the form of candles or kerosene lamps.

Aside from the cost, measure for measure, kerosene has an even more significant impact on the environment and people’s health.

Kerosene emissions include carbon dioxide, nitrogen dioxide, sulphur dioxide and black carbon – and these are all being created in the room where the light is use. Fine particles of black carbon (soot) clog the respiratory system, leading to chronic pulmonary disease. Lighting contributes to the death of millions of people each year.

According to a report from Lighting Africa ( 2010 – PDF), over 55 millions households use kerosene lamps as their primary light source.

It’s thought the emissions from burning kerosene for lighting amounts to around 190 million tons of carbon dioxide annually; around the same amount as 30 million cars would produce.

It’s staggering when you consider that this is just for basic lighting, not like the way many of us light up our houses.

There is a reasonably simple solution to this problem – solar lights.

Solar lighting has come down in price incredibly over the last decade. I remember the first solar light I bought in 2001 was $50 – and it wasn’t very effective. I’ve seen the same style of light, but more powerful, now selling for 10 bucks.

10 dollars mightn’t seem like a big chunk of change to you and I, but for a family in a developing country; it’s still a lot of money – so many of these folks are trapped in the vicious circle of spending a great deal of their income on kerosene with little hope of saving enough for a solar light.

Thankfully, there are a number of initiatives in place to try and get solar lighting to these households – and this is where we can help; by donating money to buy lights to be distributed.

It’s not only a humanitarian gesture, but strikes a blow for the environment too! Aside from reducing your environmental impact, you can help someone else reduce theirs while improving their quality of life. Donating cash for a solar light could also be a gift on someone else’s behalf.

Here are a few of these projects:

An initiative of rock group, Linkin Park, Power The World has a goal of supplying solar lighting to 1 million families by the end of 2012. $10 buys a light that will go to a family in Haiti.

Focused on assisting girls in Africa, every $10 donated will enable one more girl to access solar-powered light.

The organisation’s goal is to distribute one million 1,000,000 solar lights in various countries/

A $25 donation provides a solar-LED lantern to a village family.

A non-profit organisation set up to bring solar energy to disadvantaged communities in Africa. 10 Euros (around USD $14) donates one light.

Beyond donating solar lights, there are other interesting programs that provide solar energy systems to developing nations such as:

Assists women in Africa to build micro-businesses that help tackle energy poverty through the sale of solar powered lights.

Start your own solar light initiative

If you’re particularly motivated and want to run your own solar light project, the team at Flexiway Solar Solutions supply low-cost quality solar lights. Flexiway’s core focus is on assisting charities and other light distribution projects. 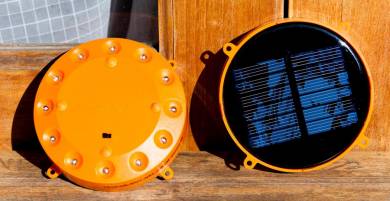 After a full day’s charge, Flexiway’s light lasts up to 8 hours before dimming slowly. The solar light comes with 3 batteries that don’t need replacing for years. According to the Flexiway site, the lights can be supplied for around $7-8 each (I’m not sure what the minimum quantity is).

While you may not have the knowledge or ability to distribute these lights directly to families overseas, perhaps hooking up with a non-profit in your area with a presence in developing nations could be a good way to go – or the Flexiway team may be able to put you in contact with an active project they are aware of.

Alternative energy holds the answer to so many of our problems; and not just environmental – solar power can change the world for the better :).

If you know of other worthy solar initiatives, please leave a comment below.