Suffer from cold feet? You might be able to avoid energy-sucking space heaters by using a heating pad.

With my butt firmly planted in an office chair for anything up to 14 hours a day, I find my feet get really cold during winter and even in the latter parts of autumn and early spring.

If my feet are cold, the rest of me is too. It doesn’t seem to matter if I double up on socks or even if I have insulated footwear on – they are still like ice-blocks.

Last year I tried a less power hungry fan heater – 750 watts. It was OK, but my feet were still a little icy and given I pay for 100% wind power for my office; it was getting rather expensive – costing me around 4 bucks a day to run.

I guess that is a small price to pay for a degree of comfort; but it just seemed a bit wasteful to me considering it wasn’t really doing the job. If I didn’t have the green power option and my electricity was coming from a brown coal fired power station, it would have also been responsible for adding around 8-9 pounds of carbon emissions to the atmosphere a day.

Additionally, fan heaters dry out the air, so I was finding my eyes were getting very sore by the end of a day.

I had also tried sticking a small column heater under my desk on a low heat setting, but that didn’t work either.

I bought a heating pad late in the season last year; but never got around to use it. Now the cooler weather is starting to make itself known in Australia, I’ve been able to give it a whirl. 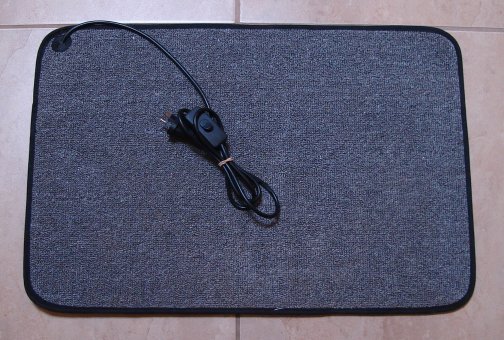 .. and what a difference. Toasty warm feet = no other heater needed. When winter arrives, I reckon an extra layer of clothing is all I’ll need.

The heating pad is providing a better degree of comfort using just a fraction of the energy. It heats to around 40C (104F). According to the vendor, it’s rated at 75 watts; but my Watts Clever unit (measures electricity consumption) puts it at 90 watts.

90 watts is around 12% the electricity consumption of my energy efficient fan heater. The heating pad will pay for itself in around 12 days of use and I’ll save hundreds of dollars extra this season.

Just a word of caution – given the nature of this sort of appliance, choose carefully. I’ve read some disturbing stories about poor quality pads having hot spots and even catching fire.

Don’t spill liquids on a heating pad, fold them or leave them unattended. Read the instructions carefully and examine the pad regularly for wear.

While I have a safety switch on my home’s switchboard that reduces fire and shock risk; I really don’t want to test it out :).