We’re having a few family members around later today, so writing this is a good excuse for me to escape the preparations :). A dozen or so extra people dropping in for a meal can create havoc in the kitchen and a good deal of washing up; so many of us opt for disposable crockery in these situations; particularly for more informal functions such as barbecues.

Disposable plates and bowls are often made from plastics that are derived from petrochemicals – i.e crude oil. Disposable is a terrible term as it tends to imply “chuck it, forget it – it’s ok”. Unfortunately the environment doesn’t forget it as these items can take a very long time to break down; and releasing toxins as they do so.

Paper plates are marginally better; but where does the fiber come from? Far too often, forests are cut down for the sake of making items with a single use. Additionally, bleaches and colors used in the production of disposable plates, cups and bowls can also have a negative environmental impact.

While I can’t say I’ve investigated how much energy and resources go into making a single china plate vs x number of earth friendly disposable plates; I’d hazard a guess that it’s still greener to wash and reuse standard crockery. Where this isn’t an option, bagasse plates such as the ones we purchased for today’s gathering are a good alternative. 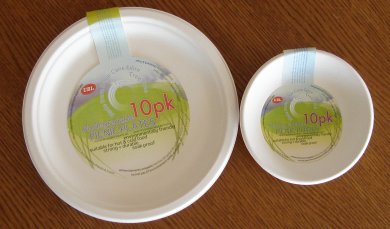 These plates and bowls are made from 100% sugar cane  left over after the extraction of juice from the cane. This substance is known as Bagasse. A sugar factory produces nearly 30% of bagasse out of its total crushing.

Bagasse bowls and plates are suitable for hot and cold food,  they are strong and soak proof; well, to the point of normal use anyway. The great thing about these disposable crockery items is once you’re done with them, you can just dig them into your garden or add them to your worm farm – they’ll break down very quickly and the worms seem to find bagasse to be a tasty treat!

While the label wasn’t clear,  I don’t think that bleach was used in the production process of the plates and bowls we bought as Bagasse is also used as an alternative for making bleach and tree-free paper.

In regards to cost – these worked out to around 20 cents per bowl or plate. A negative aspect of our purchase was the items are made in China. I’ve got nothing against China, but it’s a long way to ship an item that we’ll use once and then dispose of; so next time we’ll look for local brands.

Bagasse isn’t the only substance used for creating greener disposable crockery. Other alternatives include:

Environmentally friendly disposable crockery is becoming increasingly common, so you shouldn’t need to hunt around too much for it – we bought ours at the local supermarket!