I’ve kept an open mind on eating insects – mainly because billions of people around the world have been eating bugs for a very, very long time.

I’ve been compost worm farming for a few years now and it has really opened my mind to the role that “lesser” creatures play in the ecosystem. While worms are actually an animal, it’s my wriggly friends that have also sparked my interest in different ways of sourcing protein. I’ll take this opportunity to point out I don’t eat my composting worms :).

I recently embarked on raising mealworms and the first generation of darkling beetles (what mealworms become) have begun emerging and will soon start laying eggs; which will then grow into human-food ready mealworms.

Whether I’ll go so far as to tucking into a meal of mealworms remains to be seen (stay tuned). It’s quite easy to euthanize the little guys; I’m not concerned about the cruelty aspect – it’s the ick factor. I’ve eaten some interesting things in my life; but I have drawn the line (so far) at bugs. 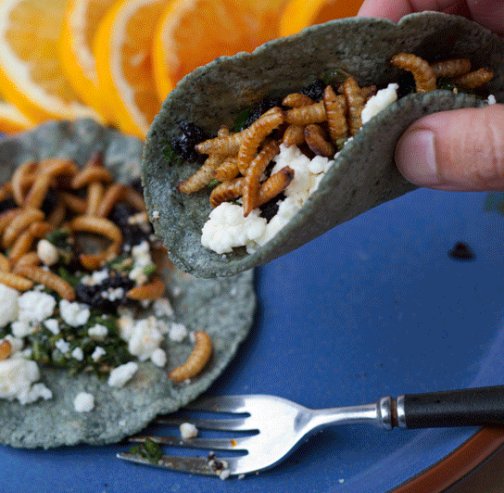 It’s funny what we recoil from in the way of food. For example, we eat crustaceans such as crabs and lobsters and they are just souped up bugs. As I understand it, insects and crustaceans belong to the same group of creatures – arthropods.

An oceanic crustacean delicacy even has the “bug” word in its name. The Balmain Bug does look like a large insect – and is very, very tasty.

Let’s say mealworms turn out to be the tastiest tidbit on the planet. Consumer perception is going to be the major battle.

However, some are already making inroads. For example, Monica Martinez; owner of Don Bugito Prehispanic Snakeria, is introducing crickets and superworms (a type of mealworm) to residents of California.

Last month in Adelaide, South Australia; ants, crickets and scorpions were served up to diners at an event focused on global food security and sustainability.

Of course, if the idea of eating bugs is just way too extreme for you (and as it may turn out – for me too); there’s always mock meat and perhaps soon, cultured beef if you’re wanting to avoid traditional meat for whatever reasons – environmental, animal welfare or otherwise. Or, as people keep pointing out to me, just ditch the meat or “I-can’t-believe-its-not-meat” fixation altogether.

There is a lot riding on us being able to reduce our meat consumption.

Trivia: the practice of eating insects is called entomophagy.