I prefer to hoof it (walk) around my property as I see more native wildlifethat way and NikiThe Wonder Dog and I get some much needed exercise to boot; but at timesit’s impractical.

When I need to haul tools or get somewhere quick, I use a 125cc ATV (All TerrainVehicle) to zap around. It’s nothing flash and probably wouldn’t be the bestchoice for a real working farm, but it does the job for me.

But I hate the noise – noisepollution is severely underrated environmental issue, a pet peeve of mineand I really don’t like contributing to it. I chose a 4 stroke 125cc partly totry and minimize the amount of noise generated; but it means I miss out on theextra grunt of a bigger ATV.

Pollution is another major issue as most gas powered ATV’s aren’t really big onemission control systems. I can’t remember where I read the information, butsupposedly ATV’s and dirt bikes in general crank out 6x the emissions  (ccfor cc) as your average family car.

Overall, ATV’s aren’t all that environmentally friendly – especially the waysome recreational riders use them; but they are a very valuable tool on a farm.

A solution is the electric ATV. These have been available for a while, but whenI last looked a couple of years ago they were around the USD $30,000 mark andwere still quite limited in what they could do in terms of real work.

I was looking at electric ATV’s again today and noticed things have reallychanged. The Chinese are starting to produce very cheap electric ATV’s, but thequality is probably a bit iffy at this stage. 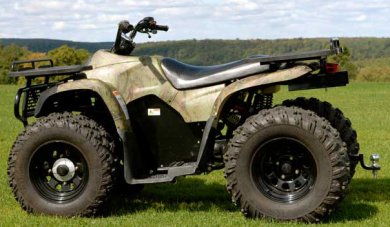 As to what “similar” means, I really don’t know muchabout ATV’s or engines generally, but I’m guessing based on the horsepower, theE-Force ATV would be the equivalent to a 300cc gas engine.

The Torque On Demand is controlled from the ATV’s digital dashboard. There’swhat they refer to as the “grannie” mode for just cruising along, thentorque levels can be nudged up incrementally for more serious work (or ahem,”fun”).

Powered by a 72 volt brush DC motor and producing up to 28HP, the E-Force storescharge in 6 x 12V-50AH SLA AGM deepcycle batteries. It takes only 6 hours to fully charge from mains power andI guess it could be rigged to charge via solarpanels for a truly clean ride; although the charge times would be far longerusing just a couple of panels.

Bear in mind just because a vehicle is electric, it doesn’t make it green – thatdepends on how the power you use to recharge it is sourced; e.g coalfired power generation is pretty filthy and even so called “cleancoal” isn’t as clean as renewableenergy. However, with many electricity providers now offering greenpower options, you can get a more environmentally friendly charge even ifyou don’t have a solarpower system.

The E-Force has a maximum top speed of 35 miles per hour and a maximum range of25 miles – so more suited to small farms. An interesting add-on for the E-Forceis a generator tray. With a generator mounted on the back, this can providepower in the field for tools and also act as a charger for the ATV if yourbattery runs out in the middle of a paddock.

It can carry 66 lbs front on the front rack and 99 lbs on the rear. Towingcapacity is a very impressive 1,000 lbs.

Oh, and judging by the video on the manufacturer’s site, it’s incredibly quiet!

Unlike my current ATV which I can push if need be (it’s under 200 lbs), theE-Force is very heavy – around 824 lbs. Based on my own deep cycle battery formy mobile solar power system, I’m guessing the batteries in the E-Force accountfor around 150 – 200 lbs of that weight. It’s a bit of a concern if it shouldroll on you and it also means a lot of the juice is spent on hauling its ownbatteries, but the extra weight can be very useful in some applications andwould help with stability.

Given the current focus on developing batteries for electric cars, maybe itwon’t be too long before we’ll see lightweight batteries for ATV’s as well.

The cost? I’ve seen the E-Force for as low as USD $6,600. That’s still far fromcheap, but a big drop from the $30,000 I had seen for similar ATV’s not so longago and is getting very close to the price of a good quality gas-powered ATV inthe 300 – 400 cc range. If it’s bought for work purposes, then it’s a taxdeductible item.

Here’s another Electric ATV I came across, the Zap Dude: 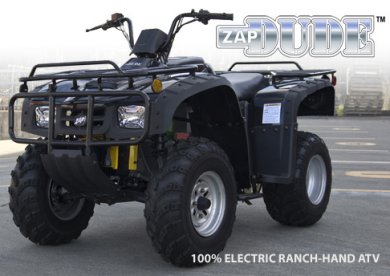 The ZapDude has fairly similar range and speed as the E-Force according to Zap, buthas a 48V permanent-magnet Brush DC Motor and a 65aH Absorbed Glass Matt (AGM) Lead Acid battery.While that means a far lighter ATV, it’s also far less storage capacity – so howit achieves the same sort range and speed I have no idea – I think the key termhere is “up to”.  Anyway, it’s another good looking electric ATVthat seems to be more than just a show-pony and at USD $5,495, will be over athousand bucks less than the E-Force when it becomes available in January.

Do you own an electric ATV; an E-Force or another type? I wouldbe interested in hearing your experiences, recommended models etc. Please addyour reviews, feedback and comments below.