I started my photography days with a Kodak Brownie. My father taught me to be very careful in shot selection as film, flashes and development were so expensive. This unfortunately did not make me a better photographer. I’ve never quite gotten the hang of translating what I perceive to what the camera lense sees.

When digital cameras became affordable, it was wonderful! I could take a zillion shots and then get at least one decent image, for example, this photo below of a Mallee bearded dragon – one of my favorites. 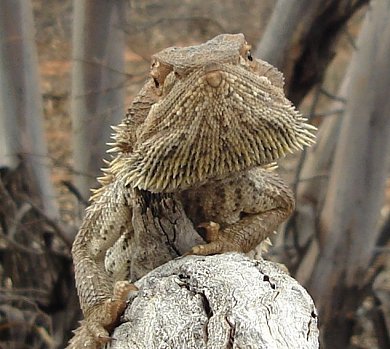 This pic has led some people to believe I’m actually a good photographer. The truth is I had to take about 30 shots to get this image – it was more good luck than good management. Thankfully the reptile was very patient and didn’t seem too fussed by the ordeal.

When it comes to the environment, it’s this aspect that certainly makes digital photography very economical and relatively earth friendly, aside from the battery issue. Digital cameras are well known for chewing through batteries, particularly when the flash is used extensively. For this reason, I use rechargeable batteries and this saves not only on toxic waste, but a ton of cash.

It also pays to get a decent name brand camera. If you go too cheap, you might find the equipment not only produces poor quality images, but quickly packs it in – more cost and more waste. You certainly don’t have to spend thousands – a decent camera for general purpose work can cost as little as $200 these days; and far less if you pick up a second hand one.

I’d also recommend spending a few dollars on a case to protect your camera as digital cameras can be particularly sensitive to dust and moisture.

While I rarely print out photos, it seems many people do according to Vancouver, Canada based eco-friendly professional photographer Tamea Burd.

As part of her business, Tamea provides people with advice about the importance of making informed choices before getting photo prints made and concerning the impacts of of film based photography.

Tamea points out that storing photos on digital media such as your computer or on DVD is far cheaper and more environmentally friendly than paying for hundreds for photos you print out and may rarely look at or never look at again.

Also, sharing pictures is so easy these days via services such as Facebook. Most photo editing programs also make it a snap to import, catalog and share your images. There’s not only the savings on the printing, but postage if sending them to friends and families via email rather than snail mail (and that means less transport related emissions too).

By storing images in digital format, they’ll also last far longer than film or digital prints that will steadily deteriorate from the moment they are processed. While this deterioration will happen even with professionally processed images, the degradation is more rapid with prints made from from home inkjet printers.

Switching to digital storage for the bulk of your photos certainly saves time and money, but there’s also some other compelling environmental reasons too.

For example, the chemicals used to develop and print photos are toxic, as are the processes for making photo-grade paper; which usually isn’t able to be recycled.

According to Tamea, for every roll of 24 film prints, at least 4 ounces of chemicals get poured down the drain during the processing. That’s not good for our waterways.

Silver is also used in the processing of film. Around 40% of all the silver consumed in North America is connected with photographic materials. Silver ions can be more toxic to aquatic organisms than mercury.

The Stockholm Water Authority in Sweden noted that the rise of digital photography was a major contributor to the halving of silver pollution in the city’s sewers in just five years.

Another environmental nasty is methylene chloride, also known as dichloromethane, which is a solvent used in the making of photographic film. The International Agency for Research on Cancer has determined that methylene chloride is possibly carcinogenic to humans.

For these reasons, while you shouldn’t necessarily forsake film cameras or printing photographs altogether – a little thought as to what you really need in printed form is not only good for your wallet, but also kinder to the planet!

By the way, if you’re looking for some photography tips or some helpful hints for preparing yourself or children for photo sessions, Tamea has some great videos on her site.