Unfortunately, the demand for cheap coffee has resulted in the increasing clearing of rainforests and other natural habitats, resulting in a decline in biodiversity. It’s also seen an increase in the usage of chemicals and pesticides; which is not only bad for the environment, it’s bad for us.

If you would like to switch to earth friendly coffee but have no stockists close by, buying it in bulk online and freezing it is the way to go. Coffee can be kept for up to 3 months in this state.

If certified organic coffee is beyond your budget; another alternative is certified fair trade coffee; which is usually a little cheaper. By supporting fair trade; you’ll be helping ensure farmers in developing countries are paid fairly for their toil. Coffee carrying the fair trade endorsement has also been produced using environmentally sustainable methods.

Some fair trade coffee is organic (it will be labelled as such if it is), but all fair trade endorsed coffee products are grown and processed in a more environmentally friendly fashion than many big brand names in the coffee industry.

Even if you can’t afford to drink fair trade and/or organic coffee all the time; even replacing one or two cups here and there helps.

When I first published this article in 2006, none of the franchise coffee houses in my area offered fair trade/organic coffee. A lot has changed in the years since; now all of them do. This has happened purely because consumers demanded not only more environmentally friendly coffee, but also social justice for those who produce it. It’s a great example of how we can effect positive change by making a bit of noise and voting with our dollars.

Instant vs. beans – which is more environmentally friendly?

Assuming that both types are fair trade and organic, which is the greener product? While instant coffee undergoes a great deal of processing; the energy consumption is offset to some degree by lower shipping weight, volume and increased shelf life; so it’s really hard to say. Looking at the massive amounts of energy and water used to create instant coffee though, my money would be on the beans. With instant coffee, it’s essentially being “brewed” twice – once at the processor; where it is then freeze or heat dried – and then when you reconstitute it.

Fair trade and organic instant coffee still isn’t all that common and in case you’re curious as to what it tastes like; in my opinion – and I’m no coffee snob – it’s shocking. The couple of (expensive) brands I bought were so bad; I couldn’t even fool myself into thinking it was somehow better tasting because it was organic. Maybe I was just unlucky.

Coffee was usually grown under the shade of other trees until relatively recently. This meant coffee plantations were quite diverse in terms of the plants, animals and insects present. Plantations then started becoming “full sun” concerns – the main reason being is you can fit a lot more coffee plants in a given space if you pull out everything else. Full sun plantations not only have less biodiversity, but often need more inputs such as fertiliser, herbicides and pesticides. Soil erosion can also be a problem in full sun plantations. For these reasons, shade-grown coffee is considered a more environmentally friendly choice.

Where does your coffee come from?

The brand I used to drink was from Brazil, which is a very long way from Australia. Food miles are an important consideration if you’re concerned about the environment. I then started buying coffee from East Timor – around 7,000 miles closer to Australia than Brazil, so less fossil fuels were used in getting my caffeine fix and the farmers growing it were getting a better deal under the fair trade system. Alas, I’ve slipped in keeping an eye on coffee miles and I just noticed the beans I’m enjoying now seems to be a mix from all over the place – Africa, Latin America and the Asia Pacific.

Coffee pods, capsules, pads and bags are evil.. and expensive

If you feel fair trade and/or organic coffee is too expensive, but use coffee pods – you’re probably paying more for the pods. A pod costs around 50c (or more). The fair trade and organic brand I’m drinking at the moment works out to be 25c a cup. Additionally, the pods, capsules, pads and bag come with additional baggage – their own individual packaging. Billions of empty coffee pods are now winding up in landfill each year.

I must admit coffee bags were a guilty pleasure of mine, but since switching to plunger coffee, I don’t miss them – but it’s taken me some time to get out of the habit of buying them!

If you’re hooked on pods, capsules, pads and bags; try to engage in a bit of ‘harm minimization’ by selecting fair trade/organic where you can.

If you’re a filter coffee drinker, another way to make your favorite brew more earth friendly is to use unbleached coffee filters – it won’t cost you anything more and you’ll be reducing the amount of organochlorines and dioxins released into the environment, which are by-products of bleaching with chlorine. You could also try getting a mesh filter for your machine; bypassing the need for filter paper.

Discover the joy of a coffee plunger

Coffee plungers seem to be pretty popular in the USA; but for some reason they appear to have fallen out of favour in Australia, with most of us opting for instant or filter coffee. Home espresso and cappuccino machines are also becoming quite popular here as they are elsewhere. Some of this equipment is incredibly expensive looks incredibly complex – it’s more “stuff” to break down!

Good coffee can be made without complex gizmos and gadgets. I’m a plunger convert after buying this 1 litre fully stainless steel model. It will probably outlast me; but was very reasonably priced. It’s so nice to own something that is solidly constructed, easy (and water friendly) to clean and so simple! While it’s made of stainless steel, it’s a fairly thick gauge metal; so the coffee stays hot for a decent amount of time. 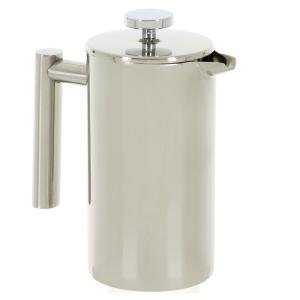 I think the aspect that turns folks off plunger coffee are the grinds in the bottom of the cup. This can be minimised by ensuring you use a coarsely ground coffee – it makes a huge difference.

Get a little exercise – hand grind your coffee

I remember the horrible noise of my parent’s coffee grinder back in the 70’s. I’m assuming they are much quieter now, but as I spend a lot of my time in the boonies where I run things from a mobile solar power system; non-essential appliances are a no-no. While a coffee grinder could be considered a critically important appliance I guess, I opted for a Porlex hand grinder – the smaller one on the right of the image below. This little unit can grind enough coffee in a single fill to produce a strong 1-litre brew. 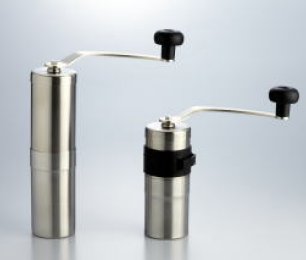 The grinder casing and crank assembly is stainless steel. The grinding mechanism is adjustable for various types of coffee brewing methods. The grinding burr is ceramic and can be replaced.

It takes me about a minute to hand grind the coffee. Aside from a bit of early morning exercise, oddly enough it’s become an enjoyable part of my morning ritual – as much as you can enjoy anything at 5am anyway.

Coffee grinds are not waste – they are a very useful product; as a fertiliser, in a worm farm  and a bunch of other applications. Learn more in my article on recycling coffee grounds.

One million non-recyclable paper coffee cups are sent to landfill from Toronto, Canada each day. That’s one city of around 2.5 million- scary stuff. It’s estimated that in the USA, 16 billion paper coffee cups wind up in landfills every year. Even if every single cup was recyclable (and most aren’t yet), that doesn’t mean their use is environmentally friendly as it takes energy to recycle anything.

I tend to drag a thermos around with me with coffee made at home, which also saves me a lot of money. Hauling around a 1 litre thermos isn’t practical for everyone, so it’s encouraging to see some coffee places offering to fill reusable cups brought in by customers. It’s a great idea; so if your favorite coffee house isn’t doing this yet, suggest it to them.

Have an earth friendly coffee tip? Please add it below.