I wouldn’t call myself a gadget freak, but in my work and given I spend a good deal of time away from a mains power supply, I use a lot of battery powered equipment. I started using rechargeables some years back and it’s definitely saved me a lot of cash.

But what about the environment?

I guess it’s a bit of a no-brainer that if you use one of something compared to a zillion, it’s got to be  better for the planet, but not if the one of something is one zillion and one times toxic :). So I decided to take a look at how rechargeable batteries stack up against their disposable counterparts.

Disposable, or dry-cell batteries are usually the alkaline type. They used to contain very high levels of mercury, but the amounts used have greatly decreased over the last couple of decades and some brands use none at all. Still, some do contain a small amount of mercury and given the massive waste involved should be avoided, or at the very least, recycled.

While rechargeable batteries have dropped in price over the years, the love affair with disposables continues. According to figures from Japan’s Ministry of Economy, Trade and Industry; in June 2013, over 75 million alkaline batteries were produced. This was a massive increase of 96% year over year.

Unfortunately, it can be difficult finding places that will actually recycle disposable alkaline batteries. Many recyclers separate them from rechargeables and they wind up in landfill anyway.

A service I came across in the USA for alkaline (and rechargeable) battery recycling is Big Green Box, which is just a box you can dump batteries into and when it’s full, send it back to the recycler. You can purchase a box for your home or office, or utilize one that’s in one of the participating stores mentioned on their site.

Button batteries are a problem as a great deal of metal is used for their comparatively small size and they can contain mercury, silver, cadmium, lithium, or other heavy metals as their main component. Thankfully, due to the increasing price of raw materials, these are a desired recyclable item.

Rechargeable batteries used to be quite environmentally toxic beasties, containing cadmium (NiCad batteries). These days, one of the more common AA and AAA rechargeables are Nickel-metal-hydride (NiMH). NiMH batteries have a better life and performance than Nicads and don’t contain as much in the way of toxic heavy metals, so they are a “greener” choice.

If you own a notebook, it’s likely the battery in it is Lithium-ion. These are the top of the line in terms of performance and the type we’re seeing in electric cars. Again, these are a more environmentally friendly option than NiCads.

Here’s a bit of rechargeable battery trivia: – the Tesla Roadster’s battery pack isn’t one big battery or even a few – it uses 6,831 18650 Lithium-ion batteries! 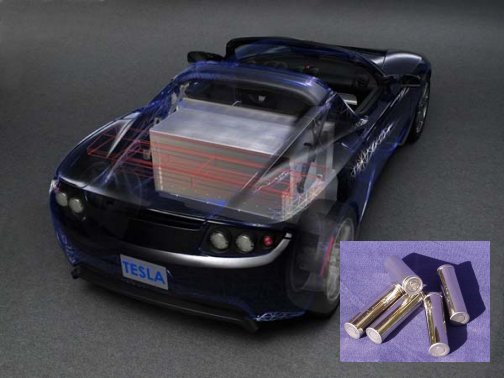 You can also buy rechargeable alkaline batteries, but these perform poorly and will cost you more in the long run – and you’ll create more waste.

Regardless of the lower environmental toxicity of today’s rechargeable batteries, they should definitely be recycled rather than thrown in the bin to wind up in landfill.

Where to recycle rechargeable batteries

If you’re in the USA or Canada, try Call2Recycle, the Rechargeable Battery Recycling Corporation (RBRC) program’s web site for further information. The following is a short video about Call2Recycle’s operations.

In Australia, Battery World stores offer a free service that has collected over 6,000 tonnes of used batteries so far.

In the UK, there’s a free recycling program called BatteryBack – the initiative aims to have over 50,000 collection points by the end of 2013

According to a study by Uniross carried out in 2007, the production of rechargeable batteries has the following advantages over disposables (comparing serviceable life):

Getting the most from rechargeable batteries

I made a few mistakes using rechargeable batteries in the beginning, so I offer the following tips so you might avoid the same. These simple tips will help ensure you get the maximum life from your rechargeables.

– If you’re going to buy rechargeables – keep track of them :). Being small critters, batteries are easier to lose. Given that a rechargeable battery in itself is more toxic to the environment than a single disposable alkaline; if you keep losing them and keep buying more, it defeats the purpose. Have a central point in the house or your car where you store flat ones. I also mark each battery set (eg. mb1, mb2, mb3, mb4) so there’s equal ‘wear’, rather than mixing old ones with new ones.

As mentioned, you can not only lighten your environmental footprint, but save a ton of cash by using rechargeable batteries.

A pack of 4 rechargeable batteries I purchased a short while ago cost me around $20. They’ll be good for at least 500 recharges, likely more. A battery charger costs anywhere from about $10 -$30. The cost to recharge the set works out to be just a couple of cents each time; even factoring in electricity. So, in total, even taking into account in the charger, a set of 4 AA will cost no more than $55 for their serviceable life.

A comparable set of heavy duty disposables cost around $2 – and that’s at a discount price. The equivalent usage would cost $1000!

Environmentally and financially, rechargeable batteries just make more sense. If you can, try ditching your disposable battery habit and reap the rewards.