While there’s not all that many parts in a solar power system, it’s critical that each component is matched and up to the task.

In previous articles in my series on solar power; we’ve looked at a basic general overview, renewable energy rebates for taking the sting out of purchasing a system and also various different types of setups and components such as grid connect, solar panels and solar regulators and inverters.

If you’re running a stand alone solar rig, you’re going to need somewhere to store the electricity to draw from when the sun isn’t shining – a battery, or a bank of batteries.

While you can use car batteries, these really aren’t up to the task, will cost you more in the long run; require more resources in their production and create additonal waste; something the environment doesn’t need.

What you need a is a deep cycle battery bank.

Why not car batteries?

Car batteries are meant to give large amounts of juice for a very short period. Once they’ve done their work turning over the engine, they are immediately recharged by the car’s alternator.

In a solar power setup, while the draw mightn’t be as brutal in short bursts, it can continue for a very long time – for example, overnight. Car batteries just aren’t made for this type of application and will wear out quickly. I found this out the hard way.

I went from this setup: 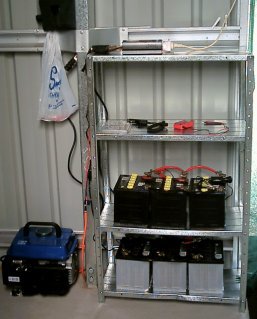 The car batteries were pretty much cactus within a couple of months worth of continuous use – they were difficult to charge and required a great deal of monitoring and maintenance. While I was able to recycle the batteries; it was still just execessive waste – and the cost turned out to be more than if I had just forked out for a decent deep cycle battery.

By using a deep cycle type, I was able to reduce my needs to one battery and it does the job nicely – around 14 hours of notebook use a day + some basic lighting. Although in retrospect, given that on a sunny day the solar panel recharges the batteries by lunch time, I should have bought a bigger battery.

What is a deep cycle battery?

The essential difference is in the lead plates. In normal car batteries, these are sponge type structure or consists of many thin plates, giving a greater surface area to generate big amps for short periods; whereas in deep cycle batteries, the lead plates are thicker and solid.

A deep cycle battery usually has multiple times the RC (reserve capacity) of a car battery, but a substantially lesser CCA (Cold Cranking Amps) rating – the focus is on consistent lower level supply rather than intermittent short bursts of high supply.

These are very much like car batteries only with thicker lead plates and have many of the issues that car batteries have when used in a stand alone power system – serviceable life, electrolyte dissipation, stratification, transporting problems and the dangers of explosive gas.

Gel deep cycle batteries contain acid with the addition of silica, which turns the acid into a jelly. Even when broken, the acid won’t spill. These batteries are ideal for daily use and deep discharge and will work well in high temperatures. They can be partially recharged without causing serious battery damage and readily accept charging due to low internal resistance; however they shouldn’t be recharged using high voltages such as what a car alternator cranks out.

AGM stands for Absorbed Glass Mat. A Boron-Silicate glass mat is placed between the lead plates, which immobilizes the electrolyte making it unspillable. This type offers the same sorts of benefits as gel batteries and AGMs are also tolerant to high voltage charging.

Another important safety feature of both AGM and Gel is that either do not off-gas under normal usage. They are hermetically sealed and recombine the oxygen and hydrogen produced within the battery.

Which type of battery is best?

I’m no expert in this, but I’d say definitely either Gel or AGM – and between those two types I’ve seen a great deal of debate as to which is better. It just depends on the application and where you’re geographically located; so be sure to consult an expert first before deciding which of the two to buy.

Deep cycle batteries are designed to be discharged much lower than standard car batteries and be recharged many more times. The life of a deep cycle battery under normal conditions is anywhere from 3 – 10 years.

Like any other piece of equipment, the more you hammer it, the less it will last you and one of the key strategies for getting the longest life out of your deep cycle battery relates to depth of discharge; i.e, how much juice you suck out of it. If a battery is discharged to 50% (around 12.06v under load or 12.24v with no load – this can be measured with a cheap multimeter), it will last about twice as long as if it is taken down to 80% discharge.

How many/big a battery to buy?

Really, the bigger/more the better. For example, I have a 100 AH (amp hour) battery and under normal weather conditions, even under partial cloud, that does me fine. One day of total overcast isn’t a problem either, but a couple of grey days back to back and I start getting around the 50% discharge mark at which point I grudgingly have to fire up the generator.

As mentioned, given that my 130 watt panel recharges the battery by midday under sunny/mostly sunny conditions; that means I have spare output that is being wasted – so I would have been wiser to buy the 150 AH battery recommended to me which would help better carry me through overcast days.

What’s with the AH?

AH, or amp hours, is how deep cycle batteries are rated. If you have an appliance that draws two amps; then it could run for 25 hours on a 100 AH battery before you’d hit the 50% DOD (depth of discharge).

Most appliances are rated in watts rather than amps, so how do you make the conversion?

Use this simple formula:

Tip: Sometimes amps are noted on appliances, check the manufacturer label on the back of the item.

After determining the amp rating of your appliances, then multiple each by the number of hours of use per day. Then add up all those figures and you’ll get some idea of the sized battery you’ll need – but bear in mind the 50% depth of discharge recommendation; i.e. a 100 AH battery really only gives you 50 AH if you wish for the battery to last well.

For example, if you had a notebook computer running at 3 amps and a light drawing 1 amp, a fully charged 100 amp hour battery could run both for 12.5 hours without any input from your solar panel before you’d hit the 50% discharge mark.

If determining the amperage of all your appliances doesn’t appeal to you; try this solar system builder that will give you a full system recommendation based on your needs.

Don’t forget that the battery is only one part of the equation. If you buy an undersized solar panel/s for your geographic and weather conditions that can’t recharge the battery in a day, then it becomes somewhat a war of attrition which will require a lot more generator use.

The subject of batteries is a very complex one, and this article has just been a primer. Given that deep cycle batteries are quite an investment (a few hundred bucks for a 100 AH gel type for example), it’s wise to consult with an expert before forking out your cash – a few minutes speaking with someone suitably qualified can help ensure you get the most bang for your buck.