As much as I’d love to drive a hybrid, pure electric or biodiesel powered vehicle, I’m stuck with petrol (gas) vehicles for the time being. It’s something that really bugged me; not only the environmental aspects, but the amount of blood that’s been spilled over black gold.

Personally, I’m all for going back to the horse and cart, walking or biking. I do little (none) of the latter, purely because as far as I’m concerned, cars and bikes on the same bit of tar do not mix :).

Up until recently, I had glossed over the possibility of converting the car to LPG . LPG stands for Liquefied Petroleum Gas – a mixture of butane and propane. LPG is produced during crude oil refinement, or is extracted from oil or natural gas seams. It’s often referred to as autogas in other countries

A conversion seemed pretty costly and I’ve never owned vehicles I’ve kept for long enough to recoup the cost. I also wasn’t aware of any environmental benefits of LPG.

The Australian Government recently announced a subsidy for LPG conversions, so I took another look at the option, and was very pleasantly surprised. Not only is LPG around half the price of petrol currently, but it also generates 15% less carbon dioxide and 20% less other harmful gases when combusted. LPG is particularly efficient in comparison to petrol in relation to cold engines – which is the situation when taking shorter journeys or even when you’re embarking on a longer journey.

Yes, it’s a fossil fuel and yes it’s not a *real* green, earth-friendly solution, but if I can cut back on what my vehicle spews into the atmosphere; I guess it’s better than taking no action at all. Let’s call it a small step among many. 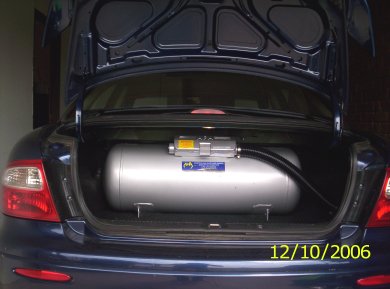 The new system took a little while to settle in, but the only downside we’ve really found is the amount of space the LPG tank takes up – about 100 litres of space; luckily we have a large boot (trunk) :). The photo is a little misleading, still plenty of room in there.

Have you had your car converted to LPG Autogas? What are your thoughts? If you have any questions about LPG conversions, please also post those below.