Clothes peg and clothespin use (same critter, different lingo for different countries) is a rarity in some places; particularly those neighborhoods where clotheslines are banned. However, for those of us who dry our clothes outdoors, peg selection and how we use these clothespins can be a part of our greening.

Outdoor clothes lines are very common in Australia and most of us would be familiar with different types of pegs and clothespins. Generally the same basic design is used. 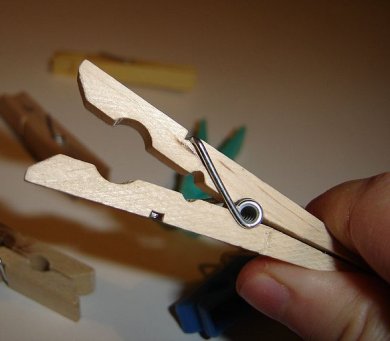 The difference is mostly in materials – wood or plastic. I avoid the plastic pegs as they have a tendency to break after a while and that just adds more plastic to an already overburdened waste stream. While having a couple of dozen pegs break a year might not seem such a big deal, when millions of other people experience the same, it all adds up.

When researching for this article I came across some weird and wacky plastic peg designs that promise to make hanging out washing a little less boring. I’m pretty sure that regardless of the design, this task would remain about the same on the excitement meter :). Additionally, some of these comparatively expensive pegs look to use more plastic and some appeared they wouldn’t have the life of their traditional counterparts due to their construction.

Wooden clothespins are a better choice in my opinion. The main issue with wooden pegs in terms of waste is the metal spring – manufacturing metals is a resource intensive exercise, so even wooden clothes pegs deserve a little care to get the most from them. At least with wood pegs, the bulk of the waste can be returned to the earth once they’ve reached the end of their serviceable live.

Extending the life of a pegs is pretty simple – don’t leave them on the line. Bring them inside between washes and whether it’s a plastic or wooden peg, you’ll dramatically improve its serviceable life.

Caring for your pegs certainly won’t save the planet, but it will just shave another small slice off your overall environmental impact and lots of small slices add up to a big chunk. While clothespins are an inexpensive product, you will also save a few bucks too. As the old saying goes, “watch your pennies and the pounds will look after themselves”.

Clothespin design isn’t exactly the most riveting topic, but I thought I’d mention a new development in the works that has wider benefits.

Scientists from The Australian National University have used supercomputers to help define an issue that causes plastics such as those used in clothes pegs to degrade over time when exposed to sunlight. The issue can be addressed, so plastic clothespins with a serviceable life of decades may be on the horizon, along with other plastic products that spend a good deal of time in sunlight. This assumes of course that product manufacturers don’t cut other corners to lessen their life (planned obsolescence), which would then only make the associated plastic waste problem worse.

On a related point; if you’re one of the many people who use an electric clothes dryer for all your clothes drying, consider making the switch to line drying. You’ll save on electricity bills, reduce your electricity related carbon emissions, benefit from a little fresh air and exercise and you’ll be able to do away with those environmentally nasty chemical-impregnated dryer sheets. If you can’t give up your electric dryer for whatever reason, check out these clothes dryer efficiency tips.