Heating and cooling are some of the most energy intensive applications in a home and also the most costly in terms of electricity, gas, oil or even wood consumed.

The cost isn’t just financial. All that energy has to come from somewhere and unless your house is supplied with green energy indirectly or has a substantial solar panel array; heating and cooling often has a substantial environmental impact in terms of greenhouse gas emissions via power generation.

While you may be familiar with using a ceiling fan during summer, have you considered using it in winter also?

As heat rises, most of the warmth you want is close to the ceiling during winter. A ceiling fan on a low speed can help push that heat down to where you are. Additionally, it can help reduce the instance of condensation on your windows.

During winter the fan will need to run clockwise, which is the opposite of the direction you want it running in summer. The reason for this is that as cold air is denser, running the ceiling fan clockwise draws that cold air up, pushing the warm air close to the ceiling aside, which then travels down the walls to a lower level of the room.

Using as little as a hundred watts, an ultra-efficient ceiling fan can shave up to 10% off your heating costs.

Ceiling fans really come into their own over summer though and work particularly well in dry areas. By moving the hot air around, it promotes evaporation of perspiration on your skin which has an cooling effect – making you feel up to 8 degrees cooler. Our bodies have very efficient cooling systems that we interfere with by wearing clothes. While it’s generally frowned upon to get around with your kit off, if you’re at home alone, who is going to know! Still, even clothed, you’ll reap some benefits in using a ceiling fan.

I’ve used fans in temperatures of over 42C (107F+) in a dry environment and while it was certainly warm, I didn’t even break a visible sweat.

Ceiling fans can also be used in conjunction with evaporative air conditioners to further promote the air conditioner’s effectiveness; allowing you to set the thermostat lower – saving power and water.

So when shopping for a ceiling fan, ensure it has a clockwise/anti-clockwise feature so you’ll be able to use it all year!

Roof turbines – benefits all year round

Also known as whirligigs or spinaways, roof turbines are lightweight spinning vents that suck air out from your roof cavity. Waterproof and requiring no electricity, the roof turbine will start spinning in even the lightest breath of air and good quality turbines can also withstand hurricane type conditions.

During summer, the space between your ceiling and roof gets incredibly hot – up to 50 – 60 degrees Celsius (122F to 140F). Even if you have insulation in your roof area, some of this heat will still make its way into your living space.

A roof turbine is relatively easy to install – even I was able to do it – and that’s saying something. Let’s just say I’m like lightning with a hammer; I never strike twice in the same place :). 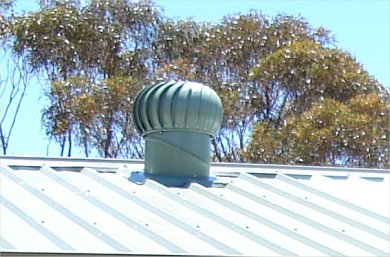 A handyman project I somehow managed not to screw up!

The blast of hot air I felt when cutting a hole in the roof for the turbine was incredible – it was like opening a door to a furnace. Much of that heat is now being whisked away and the difference is certainly noticeable.

During winter, and especially if you have roof insulation, leaving the roof turbine vent open can help reduce moisture build-up in your roof area.

Up to 12 litres (around 2.5 gallons) of moisture can accumulate in your roof space daily from bathrooms, laundries and kitchens.  A dry roof space not only helps protect timber frames, but your insulation as damp insulation is nowhere near as effective as when it’s dry.

Don’t skimp on a turbine, I’ve seen some cheap and nasty plastic versions around that simply won’t last the distance. A good quality turbine doesn’t cost the earth though – I paid under a hundred dollars for the model above which is made primarily from aluminium alloy, has a cyclone (hurricane) rating and a 10 year warranty.

As to how many you’ll need; as roof turbines vary so much in size and operation, this will vary – but each manufacturer usually includes a guide on the outside of the box.

So there you have it – summer and winter, ceiling fans and roof turbines can help cut your energy costs; and that means less greenhouse gas emissions and more dollars back into your pocket!