Note from Michael: this article is part of my series on solar power basics, which aims to provide an overview on how various types of solar energy systems work and more detailed descriptions on the various componentry and their role within the system – (first published June 2008, last updated December 2011).

I still haven’t gotten over the novelty of looking out my window and seeing a solar panel out there quietly churning out the juice I need to power my notebook and lights when I’m out on my chunk o’dirt in the Australian outback.

A single 130 watt 14 kg (about 30lb) panel does the job – and the same panel should continue to do so for at least the next 22 years. All this from a combination of silicon, glass, aluminium and wiring – no moving parts or heavy maintenance required. 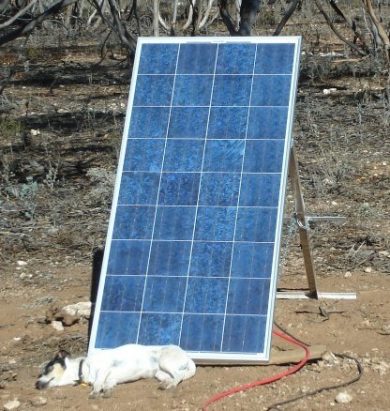 The ever vigilant Niki guarding my solar panel

When I started to seriously look into finally buying a solar panel, I wanted to get a better idea of how they actually work – it all seemed like voodoo. Unfortunately, much of what I read required a uni degree in a relevant area to understand the magic.

If you’re a high school dropout like me with better things to do than try to dig up your old Physics/Chemistry 101 textbooks; here’s a brief rundown.

A solar panel is made up of photovoltaic cells, usually 36 all told, varying in size depending upon the watt/amp rating of the panel. These cells are made from two very thin silicon wafers approximately 1 mm thick; one with a positive charge and the other negatively charged.

When exposed to the sun’s rays, electron activity is generated which is captured by a grid of very fine finger-like electrical contacts distributed across the panel. This is then channelled through the junction box on the back of the panel and emerges as DC (direct current) electricity. 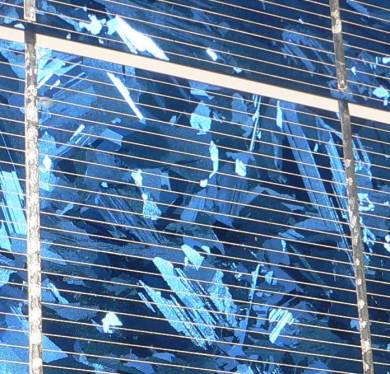 Closeup of a polycrystalline cell showing the fingers of conductor material

Covering the sheet of silicon cells is a layer of toughened glass, usually around 3mm thick. It has to be strong enough to withstand hail, extreme temperatures and a degree of flexing, but thin enough not to filter out or reflect appreciable amounts of light.

As silicon (which is usually sourced from sand) is also reflective; it requires a thin layer of anti-reflective material.

The back of the solar panel is made from aluminium and the panel is set into an aluminium frame.

Once the juice exits the panel junction box, it travels along cabling. The size/diameter of cabling is of critical importance. If it’s too thin for the panel’s output and distance to be covered, it’s a little like trying to pour a large volume of water through a small opening. There will be a loss of electricity as it will convert to heat along the cable to the point the cabling can burn out.

This handy DC cabling size tool can tell you what diameter cable you’ll need for amp rating of the panel you buy and the distance there will be between the panel and the solar regulator or inverter.

Makes it all sound relatively simple doesn’t it? I’m still in awe that sun shining on silicon and a bit of wiring can generate electricity though, but each time I try to delve further into how panels work, my brain says “let’s go check out what the Sleepy Lizards are doing instead” :)

Rigid solar panels cell are usually made up of either monocrystalline or polycrystalline (aka multicrystalline) cells. Monocrystalline cells are cut from a chunk of silicon that has been grown from a single crystal.

These are used in the more expensive types of solar panels and are more efficient in converting the sun’s rays to electricity and also more tolerant to heat. It’s one of the great solar power myths that hot days are the best for producing electricity – it’s actually cool and clear days that are. The advantage of summer is just longer sun hours.

A polycrystalline cell is cut from multifaceted silicon crystal. More surface area is required due to inherent flaws and these panels are less efficient in converting the sun’s rays. However, polycrystalline technology has closed up the performance gap in recent years.

Thin film panels are created by the application of a thin layer of silicon or other photovoltaic compounds directly onto various materials. These can be applied in such a way that flexible panels can be made.

Thin film panels areless efficient that polycrystalline and monocrystalline panels, so a larger surface area is required, which can be a problem if you have limited roof space. Again, performance in thin film technology is constantly improving in the area of efficiency.

Given the processes to create thin film, cheaper alternatives to silicon can also be used, such as cadmium telluride; although cadmium is frowned upon by many as it’s a heavy metal.

The sun and geography

Sunlight isn’t the same around the world. Even without cloud cover, different places on Earth receive varying levels of solar radiation. When calculating the size and number of solar panels you’ll need; kilowatts-hours per square metre (kwH/m2), or more commonly known as solar “peak hours” need to be taken into account. This is the number of hours a day when the sun has maximum punch in relation to potential for electricity generation.

These peak hours are also measured against average winter sun; the time of the year when you’ll have the least sunlight. For example, where I’m located, during winter we get around 4.5 peak hours a day on average during winter. In some parts of Australia during the same time of the year, they get as much 6.8 and in other places, as little as 2.6 – so you can see it’s important to know how much peak sun your part of the world gets when calculating how many panels you’ll need.

You can get an idea of how many peak hours of sunlight in your area by using using this solar panel calculator – the figure to look for once you type in your area is the “Solar Irradiation:” Whatever the kW/m2/d figure is, that’s your peak sun hours.

Again, this is dependent upon where you are in the world and also greatly varies with the season.

During summer, the sun sits a lot higher in the sky that during winter, so it’s best to “chase the sun” so you can to get the maximum oomph from your panels. However, this is difficult to achieve if the panels are sitting on your roof, so a happy medium is usually found. Basically, if you have the angle good enough to get you through the winter months, you’ll have no problems during the summer.

The general guidelines are:

For example, my latitude is around 34 degrees, so when it’s winter here in Australia and we’re coming up to the winter solstice (shortest day), I have mine sitting at about 45 degrees, a few degrees off what would be considered optimum for this time of year.

Solar panels and shade simply don’t mix. While some panels claim to be shade tolerant, you will lose substantial charging power even if only a partial area of the panels is affected by shade. If one quarter of the panel cell area is shaded, the juice being cranked out will be virtually nil. Depending on the setup, an entire string of solar panels’ ability to generate electricity can be affected by shading of a single module.

One of the wonderful thing about solar panels is there’s no moving parts, therefore next to no maintenance! A wipe/brush down occasionally will help prevent build-up of dust and grime that can impact on effectiveness; but usually the rain will also take care of this. Other than that, a visual inspection of frame seals and wiring from the junction box is all that’s really needed.

Costs vary widely depending upon the type, wattage and brand of panel. Additionally, the margins that stockists apply to their panels can differ tremendously.

I paid under a thousand dollars for my 12 volt, 130 watt solar panel from Energy Matters Australia in early 2008, but nowadays a larger panel made by the same manufacturer can be purchased for half the price. Generally speak, 12 volt solar panels are usually used in off-grid situations. You’ll get far more bang for your buck for solar modules used in grid connect home solar power systems – around twice the wattage for the same price.

You can pick up cheap panels on places like eBay, but given the size of the investment this can be risky if the merchant suddenly disappears or the sale of the panel is a sideline rather than part of the merchant’s core business focus. You could be spending a lot of cash, so you’ll want to ensure the person/business you’re buying from are renewable energy experts and in it for the long haul.

This is one of the most asked questions and there’s no set answer – it’s all down to your electricity consumption, geography and other elements of your system – for example, if you have a stand alone power system as opposed to a mains grid connect , the capacity of your deep cycle batteries, which aren’t usually used in grid connect systems, play a major role.

Here’s a quick and dirty formula. It’s based on watts rather than amps (amps would be more accurate) for the sake of simplicity.

To gain a more accurate idea, some web sites such as Energy Matters offer detailed solar panel calculators or easy to use solar quote tools that will take into account issues like your geography and other elements of the system; e.g. whether you’ll have a grid connect or stand alone system and how much of your electricity you wish to generate via solar power.

Solar panels still aren’t dirt cheap, so if you’re switching to solar it’s a great time to also carefully evaluate your electricity use. The less juice you need, the fewer panels you’ll need and you’ll save a ton of cash. Don’t forget that many governments around the world also offer substantial solar panel rebates which can really help remove the financial sting from your purchase!

Solar panels are just one part of a solar power system. To learn a little more about the other components, view my article: Solar Power Basics.