Water – we tend to take it for granted; only really understanding how important it is when it’s not readily available. With so many areas in drought or facing water difficulties; we all need to do our bit to conserve the precious liquid.

So much energy and so many resources go into getting water into our homes – sometimes it’s piped hundreds of miles from river systems that really can’t cope with the massive draw, then it needs to be treated. It’s much more than just about the water itself; especially given we consume and waste so much of it.

One of the solutions to saving the amount of water we consume from mains supply is right above many of our heads – the roof.

In a previous article, I wrote about rain water tank materials – but that piece was mainly relating to tanks holding thousands of gallons. Not everyone can fit or afford such a tank; but there is a very economical option – the rain barrel.

Holding usually around 55 gallons, rain barrels can cost under a hundred dollars including the diverter. They come in all shapes and sizes, from the purely functional to ornate. Some people even use wheelie bins for a mobile solution! 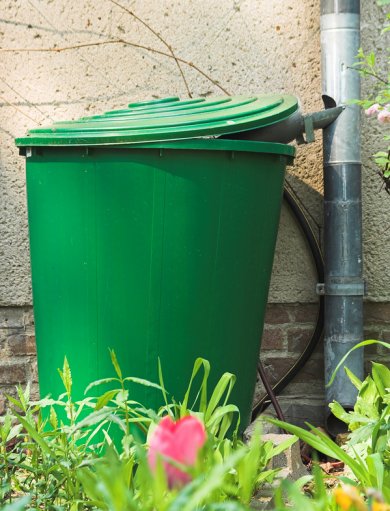 Rain barrels don’t require complex replumbing; as you can see in the above photo, a simple diverter has been used on the downpipe which can be easily installed by most people with the help of a hacksaw. More efficient diverters also shut off when the barrel is full to prevent stormwater overflowing into your yard.

55 gallons may not sound like a lot, but bear in mind it’s constantly being refilled. If you’re in an area with significant rainfall; you could be emptying and having it refilled each week, courtesy of Mother Nature rather than your local water utility:

That’s 2860 gallons less you’ll be drawing off the mains supply annually. If thousands of others did the same, it really starts adding up. Even in dryer climates, you’d be surprised how much water you can harvest.

The roof – a waste resource

Our suburbs towns and cities have incredibly huge catchment capacity – all that roofing! However, it’s sadly underutilized.

To get some idea how much your roof collects, use this formula:

Roof square feet x .6 for each inch of rain = gallons

For example, and this is just an estimate, the average house size in the USA is 2349 square feet; so:

The average house size (new construction) in Austraia is 227.6 m2 so that’s 227 liters of water for each millimeter of rain.

Buy a rain barrel or make your own.

Rain barrels are usually made from food grade plastic and are readily available from many larger hardware stores. You’ll also find many merchants selling them over the Internet.

As mentioned, some people use all sorts of containers; but a word of warning – try to use a plastic that’s not going to leach nasty chemicals into the water which could wind up in you or in your garden.

Polyethylene, which a UV stabilized, food grade plastic is a good choice. Most containers won’t provide this information so look for the plastic resin code (also known as recycling numbers) 1 or 2 stamped on the container. I picked up some sturdy 15 gallon plastic trash bins for $10 each that I’ll be using to store some emergency water for my heritage seed based vegetable patch – that is if it ever rains out here again :)

Even if not for the environmental aspect, a rain barrel is an excellent investment in disaster preparedness. For example, what would you do in the water in your town or city was suddenly shut off? You could buy it from the local store, but you’ll be battling many others with the same idea. In that scenario, a rain barrel could be the best one hundred dollars you’ve ever spent. There’s nothing like a bit of self-sufficiency given the bumpy road ahead we face!