CFL technology has certainly had a huge impact; allowing millions of us to save substantial cash and carbon dioxide emissions through electricity savings when compared to using standard incandescent globes. In fact, in some countries, the sale of incandescent bulbs will be officially phased out within the next few years.

LED based lighting for domestic applications has recently been getting increasing attention due to advances in technology and reduction in price. LED lighting has been around for years; it’s extensively used in applications such as those little red lights on your hi-fi, standby lights on TV’s, operation indicators on adaptors and other electronic equipment. For room lighting, it’s often used in off-grid setups, RV’s and other 12 volt lighting applications.

LED’s have no filament to burn out and they generate little heat. Heat is where much of the energy is wasted in an incandescent globe. LED’s are illuminated by the movement of electrons in a semiconductor material.

While CFL’s only sip electricity and have a very long life in comparison to incandescent bulbs, LED’s consume less than half  the electricity of compact fluorecent lampgs and last about ten times as long. While there’s been concerns raised about the improper disposal and recycling of CFL’s as they contain small amounts of mercury. LED’s don’t have any mercury content at all.

Individual LED’s are quite small, so it takes a lot of them to produce an array suitable for lighting an entire room. CFL light output is omnidirectional whereas light from a LED is directional; i.e. more focused – so the application needs to be taken into consideration. In most domestic applications, the lighting appliance will be a long strip, or a cluster of LED’s in a lamp fitting set at different angles, or with an array of lenses on the light cover to diffuse the light.

With so many LED’s needed in a single light, the type of light it generates and the the materials an LED is constructed from being quite expensive, uptake has been relatively slow; but prices are rapidly dropping.

I had messed around with LED lighting previously, but wasn’t really impressed with the light it produced – fine for torches etc., but for use in the home without spending hundreds of dollars on high end lamps; I found the light to be … odd. I really can’t describe it any other way; it was very cold, unnatural and much harsher than traditional fluorescent lighting.

More recently, I bought one of these lights to use in a small shed I have on patch o’ dirt in the outback: 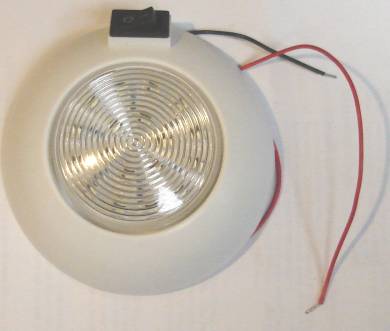 This 12 volt lamp contains 18 LED’s, but is very compact, has a total current draw of only 100mA and consumes only 1.26 watts, so it’s perfect for my solar power setup. The draws only a quarter of the power of the energy efficient CFL I was using previously – and as anyone running on solar power can tell you; every watt counts.

The LED lamp lights the shed up well and I can read comfortably. While it’s still not a “warm” light, I’ve grown accustomed to it.

Given the lamp should last 100,000 hours; for around 30 bucks it was a good investment. Actually, given the amount I use it, this LED lamp will likely outlast me! I couldn’t give you an accurate direct comparison to an incandescent light in terms of intensity, but a guesstimate would be it’s as “bright” as a 25 watt incandescent bulb. If you’re interested in buying one, try running a search on eBay in your country (that’s where I picked mine up from).

Update: This light, like many other LED lights, did not last the distance – and I have since discovered why not all LED lights are created equal.

The next big thing in LED lighting is the OLED, which stands for Organic Light Emitting Diode. These are comprise of extremely thin organic materials layered between two electrodes that produce light when an electrical charge is applied.

One of the main features of Organic LED technology is their flexibility – OLED’s could be worn on clothing, embedded in curtains. With further development, it’s believed Organic LED’s could be cheaper than regular LED technology and also clear the “cold” light hurdle; offering a warmer quality of light comparable to fluorescents and CFL.