Wind turbines offer part of the solution to the world’s renewable energy sourced electricity needs, and in some countries currently represents over 10% of the electricity supply.

This percentage will no doubt increase in the years ahead and the sight of wind turbines scattered across landscapes will become an increasingly common occurrence. It’s all a part of the battle to reduce global warming induced climate change and to reduce our reliance on fossil fuels.

While we’re likely most familiar with the huge turbines that crank out electricity for hundreds or thousands of residences, there are now many smaller options available for residential use.

It’s important to understand that wind is actually a form of solar energy – so by saying that a wind turbine harnesses solar power isn’t totally incorrect. Wind is a phenomenon that occurs caused by the uneven heating of the Earth’s surface in combination with the spinning of the planet on its axis.

A wind turbine, instead of operating like a fan in your home that uses electricity to create wind, uses wind to create electricity. The blades of the turbine are shaped in such a way that wind causes them to rotate, which spins a low speed shaft with a gear at the end which is connected to another smaller gear on a high speed shaft that runs through a generator housing.

The generator creates electricity using much the same principle as the alternator on your car (depending on the turbine type). A magnetic rotor on the high speed shaft inside the generator housing spins inside loops of copper wire that are wound around an iron core. As the rotor spins around the inside of the core it creates “electromagnetic induction” through the coils that generates an electrical current. That current is then regulated and fed into the grid (or a residential grid connect system) after some modification so that it can be used in our homes or routed into a battery bank for storage. Where a battery bank is used, a regulator prevents overcharging.

The most common wind turbine is the horizontal-axis, which looks somewhat like a traditional windmill, but there are also vertical-axis designs that look similar to an egg-beater or paddle wheel laid on its side. 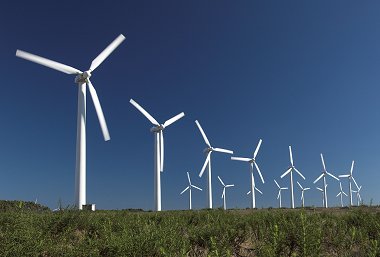 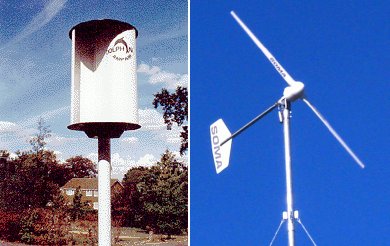 In the horizontal-axis type, a yaw mechanism in the turbine shaft is utilized to turn the wind turbine rotor into the wind, increasing efficiency. In most cases with wind farm turbines, this is a powered by a small electric motor and computer monitoring.

Wind turbines for commercial electricity production usual range from 100 kilowatts to 5 megawatts. At the time of writing, the largest wind turbine in the world had a rotor diameter of 126 m (390 feet) and the potential to generate enough electricity for 5000 households.

A wind turbine for home use has rotors between 8 and 25 feet in diameter and usually has the potential to generate between a few hundred watts and 6 kilowatts of electricity. Some wind turbines can be used in conjunction with a grid connect system.

For every kilowatt hour of electricity produced by wind energy or other green means, approximately 1.5 pounds of carbon is prevented from going into the atmosphere if that electricity had been sourced from coal fired power plants. Carbon dioxide is a major contributor to global warming induced climate change.

A wind turbine usually needs wind speeds of around 10 miles an hour (16kmh) to start generating electricity and optimum wind speed for large turbines is approximately 30 miles per hour ; so they aren’t really an option if you’re located in an area where winds are usually light and variable, although some models are now being produced that can generate electricity with as little as 5 mile per hour wind speeds – particularly vertical axis models.

Wind speed usually increases with height and where there are no natural or man-made obstructions and this why you’ll often see them on hilltops or perhaps in the middle of wheat fields. The wind energy industry has been a boon for many farmers as they can still crop their land with little interference and also generate an income from allowing the turbines on their property. Increasing numbers of wind farms are also being erected offshore.

The blades of a wind turbine rotate at a rate of between 10 to 50 revolutions per minute. In a situation where wind speeds are excessive, for example if there’s a gale, the turbine automatically shuts down to prevent damage.

The lifespan of a modern turbine is pegged at around 120 000 hours or 20-25 years, but they aren’t totally maintenance free. As they contain moving components, some parts will need to be replaced during their working life. From what I’ve researched, the cost of maintenance and parts replacement is around the 1 cent USD/ AU per kWh or 1.5 to 2 per cent annually of the original turbine cost.

Wind turbines aren’t overly noisy – mechanical noise is minimum these days and you’ll mostly hear the swoosh of the blades passing the tower. Of course, if you’re living close to a large wind farm, it could present some noise issues; but most countries have regulations regarding the placement of wind farms in relation to residential areas.

Wind turbines are created from fiberglass, plastics, aluminium, copper, steel and various other metals, so they do have an impact on the environment in that respect and there’s also the energy used to to manufacture the turbine. Many turbine parts are recyclable and it’s my understanding the amount of energy used in manufacture is balanced out within six to eight months after being commissioned.

Wind farms do have an impact on birds – there have been recorded cases of birds being killed by rotor blades when they fly into them; but there’s a great deal of research being carried out to try and minimize the problem. It’s also an issue taken into consideration in most countries when choosing a location for a wind farm in relation to bird migratory patterns.

Costs and regulation for residential turbines

Turbines used in residential situations are much quieter than their wind farm counterparts, but you’ll need to check with your local authorities as they are still not permitted in some areas – this being the case, your best options for renewable energy is solar power. If you do meet resistance with your local council, talk to them about vertical turbine options as these emit lower noise, have a lower profile and are considered to be generally more aesthetically pleasing than their horizontal axis counterparts. As local government tends to be behind the times with technological developments in renewable energy, it doesn’t hurt to raise the possibility of that alternative.

Wind turbines for home use vary in price and greatly depend on your electricity needs vs. wind availability, but you can expect to pay around $12,000 to cater for the average home. However, bear in mind that cost can be greatly offset by renewable energy rebates offered by many governments.

Many people think that wind turbines are ugly, and I tend to agree; but I feel that way about most things man made that are added to a natural landscape. Aesthetics aside, the other point that people should bear in mind that if we want to maintain the level of comfort we’ve grown accustomed to in our modern lives, there will always be some sort of price to pay beyond dollars and cents.