Noticed how tomatoes don’t taste the same as they used to? Experienced strawberries that seem to be just insipid bags of water? Do apples seem to be more acidic and less flavorsome than in bygone years to you?

As we get older, our taste buds certainly do get less sensitive, but there is a more insidious reason for fruit and vegetables not tasting anywhere near as good as they once did.

They’ve been engineered not to.

Taste appears to be the least important factor to the companies that produce the seeds for most of the world’s fruits, vegetables and grains.

Even the fruit and vegetables we grow in home veggie gardens don’t stack up against what we remember as the seeds come from the same stock as mass agriculture, but by using heirloom and heritage seeds, you can return to the delightful tastes of yesteryear.

In the USA, only 5% of the apple varieties that existed 200 years ago still remain. In the UK, 90% of  vegetable varieties have disappeared over the last century. 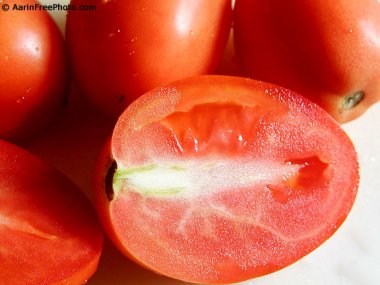 Today’s tomatoes – nice to look at, but where’s the taste?!
(Image courtesy of aarinfreephoto.com)

We are basically driving many of our food resources to extinction on purpose. Market control, aesthetics and shelf life reign over diversity and taste these days.

Hybrid varieties are developed by companies for pest resistance, fast growth and uniformity; then marketed to a such a degree that traditional varieties lose popularity and disappear. They are also are bred for qualities related to easy machine harvesting, long distance transport and refrigeration.

The seeds you buy at your nursery, even the fruit and vegetables you purchase from organic farms are likely to be these hybrid varieties.

Another disturbing issue is just a handful of companies control the majority of the world’s seed production and as a result, farmers and home gardeners are basically held to ransom.

One of the largest players in the seed industry with the most control is Monsanto –  a leading biotechnology company and pioneer in genetically engineered seeds. Based on 2005 figures, here’s just how huge their reach was:

(Figures from The Action Group on Erosion, Technology and Concentration)

To tie farmers to the company Monsanto makes the farmer sign an agreement promising not to plant seeds their crops produce. The gathering of seeds from a successful crop for the next year’s planting is an age old practice.

Monsanto is also the company that bought rights to “suicide” or “terminator” seed technology some years ago. This is where the seeds produced by a crop are sterile; helping to ensure that the farmer does have to pay for more seed. Thankfully, global backlash and a UN treaty in 2000 prevented these suicide seeds from entering the marketplace. There was great concern of contamination of other crops resulting in normal seeds acquiring the terminator traits, causing crop failures and giving Monsanto even greater control over the seed industry.

In a recent twist on terminator seed technology, it seems that “Zombie” crops are being developed in the EU and the research is being funded by the British taxpayer. The seeds are called zombies as they have been engineered to produce sterile seed that can be made viable again with a chemical treatment. The chemical treatment will of course likely be sold by the company that markets the seed.

Without genetic diversity being maintained, food production is at risk from epidemics and infestations. For example, over 70% of the corn acreage grown in the U.S.A. was planted with just six varieties of corn back in the early 1970’s.  When a new strain of southern leaf blight fungus emerged in 1970-71, many corn fields across the country were wiped out.  An estimated 250 million bushels of corn was lost to the blight in Illinois alone.

If you grow fruits and vegetables at home, there is something you can do to get away from the major players and grow the truly tasty vegetables of yesteryear – after all, isn’t that one of the reasons we establish home veggie gardens in the first place?

Heirlooms are open-pollinated plant varieties. If the seeds are saved, they will produce the same variety. Hybrids are the result of a cross between various varieties. Seeds from hybrids often do not sprout and if they do, the resulting plant can experience problems as they being to revert to the traits of the parent plant used in hybridization.

Heirloom and heritage varieties are usually considered those that are at least 50 years old; although some vintage varieties have a traceable history dating back hundreds or thousands of years.

Heirloom varieties do have good disease resistance and the yields are often higher than hybrids. Heirloom varieties also tend to produce over a longer period each season – so there’s less problems of waste if you don’t have people to give away surplus to.

If you’d like to find suppliers of heritage and heirloom seeds, a popular company in Australia is Digger’s Club. In the USA, try Seeds Of Change. Another way to locate suppliers is via your favorite search engine by simply typing this query

By growing heirloom and heritage varieties, not only will you have tastier produce, you’ll be playing an important role in maintaining genetic biodiversity!

I really wish I had known about heirloom and vintage seeds when we had our last vegetable garden – while the produce we grew was nice to have, it still didn’t taste anything like the veggies my dad grew in the 70’s. I look forward to establishing my next garden growing nothing but heirloom varieties!