I lifted the bonnet of my car the other day to discover a few rat droppings over the top of the engine. I couldn’t believe it – this had never happened to me before and I went into a state of denial for a few minutes while I feverishly checked for damage.

Aside from the ick factor, having a rat running around in your engine bay presents a serious safety issue as they like gnawing on things. I was lucky in that the rat had only had taken a small nibble of the firewall soundproofing material and a little bit of electrical tape.

As much as I like to observe a “live and let live” approach to critters wherever possible, this situation had to be dealt with.

In my article on earth-friendly rodent control, which focuses more on prevention rather than cure, I mention I try to steer away from poison baits in dealing with rodents. Not only does the animal suffer an excruciating and drawn out death, other animals that may prey upon the ailing rat or mouse can be poisoned too.

Snap traps are an option, but again, they can sometimes maim and not kill – plus there’s the risk of non-target species being whacked.

An additional complicating factor in my situation was the possibility the rat wasn’t an introduced species as Australia has its share of native rats as well. They are uncommon in my area as far as I know, so I didn’t want to contribute to making a species in this region extinct.

To deal with mice, I’ve had great success in the past with the Victor Electronic Mouse Trap; which during a recent plague killed dozens of mice stone dead pretty much instantly, every time and without any non-target species affected. Rat-sized zappers are also available, but they are rather pricey, I needed something fast and was uncertain about native rat habits – whether they may enter the zapper. Additionally, as the trap would need to be outside, an electronic trap may not have been suitable.

After a chat with a local agricultural supplies company, I picked up a Eurofarm Rat Trapdoor. Made of metal and well-constructed, this trap cost around AUD $50 (around USD $55 at current exchange rates). 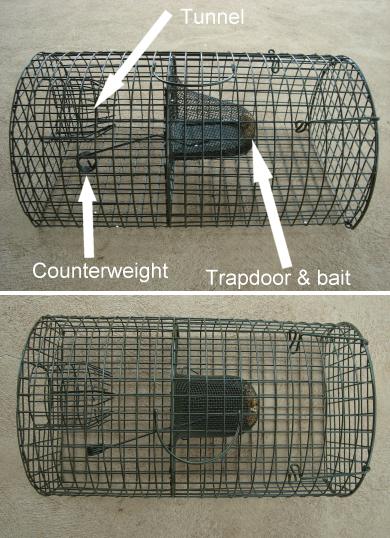 Bait is placed on a lip of metal that covers the end of the trapdoor. The rat crawls in through the tunnel and onto the internal caged platform. The trapdoor drops and the rat can’t escape. This model can hold several rats.

I can’t say I’ve had success with it yet, but I haven’t seen any further evidence of the rat. A few granaries in the area are using this model and have found it highly effective. This particular brand doesn’t appear to be widely available online, but if you run a search on Google for “multi catch rat trap”, you’ll come across a few similar designs; even some you can make yourself.

Of course, once the rat is caught, I will still need to do something with it. While well- meaning folks might “relocate” non-native rats and mice caught in humane traps, this really is misguided given how fast the rodents can breed and the amount of structural and environmental damage they can cause. However, if my visitor is a native rat, while it is also being destructive, I certainly won’t kill it. It will be relocated in bushland … as far away from my car as possible.