It’s hot over here at the moment; darned hot. In the last week out here in the boonies, I haven’t seen peak daytime temperatures below 35 degrees celsius (95 degrees Fahrenheit) inside and some days the it’s reached 46C (115F).

These types of temperatures make it quite a challenge keeping food and drinks cool enough so they don’t spoil quickly.

I was considering a car fridge, but the cheaper ones are quite power hungry – around 5 amps draw. These thermoelectric refrigerators will usually only cool around 20C below ambient temperature; 30 degrees for higher end models. It’s a lot of power used for that kind of result. An energy efficient 12v DC compressor based refrigerator gets better performance, but they are quite expensive.

There’s no mains power on my property, but I have a mobile solar panel rig that powers my notebook, small appliances and a few lights quite nicely and it’s small enough to pack up and bring back to the burbs at the end of each trip. However, I wanted a little more self sufficiency in case I had a couple of days with poor sunlight…. and just for the sake of self sufficiency :)

Recently I’ve been researching on using evaporation for cooling food – it works much like the principles behind evaporative air conditioning. The old meat safe that was used in Australia back in the pioneer days was a possibility, but it needs to sit outside to get the required air movement for effective evaporation and even then, isn’t all that effective. I wanted an inside solution anyway.

I’d read about pot-in-pot fridges, also known as Zeer pots, which seemed much simpler and more effective so I decided to give that a whirl.

How a Zeer pot works

The Zeer pot was invented by Mohammed Bah Abba in 1995, to address a huge need for a cheap way to cool food in poorer areas of Africa and places without mains grid electricity. In hot places such as Nigeria, a great deal of food is wasted as it basically needs to be consumed immediately or it will spoil.

A pot-in-pot fridge consists of two unglazed terracotta pots, one larger than the other. If the pots have drainage holes in the bottom of them, these need to be plugged. A layer of sand is placed in the bottom of the large pot and the smaller pot placed inside. Sand is poured in the gap between the two pots (which ideally should be about an inch wide) to just below the rim. It’s also best that the smaller pot is level with the larger pot. A little lower is fine, but it definitely shouldn’t be higher.

Water is then poured on the sand until it begins pooling on the surface. The pot is then placed in a shaded area with good ventilation.

The dampness penetrates the walls of the terracotta pots, which then evaporates. This evaporation cools the pot, the sand and the food/drinks that are placed inside the smaller pot. Wet fabric such as a tea towel or hessian is also placed over the smaller pot to assist further with cooling. The Zeer pot works best in areas with low humidity levels.

This sounded like a project that even I couldn’t screw up too badly, so I gave it a whirl: 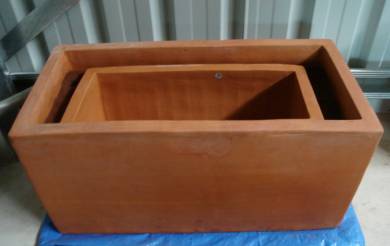 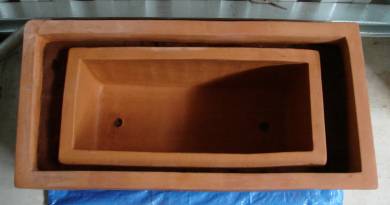 So, did it work? I’m pleased to say it did indeed!

Given the conditions at the time, everything was very, very hot from the outset – the pots were hot to the touch and I couldn’t even touch the sand when I first dug it up due to the heat. It took about 12 hours for the fridge to “charge”, that is, for the water poured in to totally seep through the terracotta and to see appreciable temperature drop start to occur, but as you can see above, the walls of the pots are very thick. In other Zeer pot examples I’ve seen, the terracotta is thinner and usually round pots are used which also may work better.

My pot-in-pot fridge is stored in the corner of my shed, so it doesn’t get all that air movement, but it still worked fine.

It took around 15 liters (just under 4 gallons) of water to “charge” the fridge. Since that time, I’m only using about a litre (quart) of water a day to keep the sand moist, which is great as water is gold in these parts – haven’t seen any rain out here for over a month.

There’s no dripping, so the unit is also tidy to run; but I have put a layer of thick plastic beneath the large terracotta pot so that water isn’t lost through seepage through the bottom; which wouldn’t evaporate anyway.

As for temperature drop, the best I’ve achieved so far is a drop of 21c compared to ambient temperature. On the 46C (115F) day, the air temperature inside the internal pot was around 25C (77F), and the walls themselves a few degrees cooler again. Not exactly icy cold but on a day that hot, believe me that a drink at that temperature is absolutely wonderful.

Of course, during the night and cooler parts of the day, temperatures inside the fridge are much lower. I suspect that with a few changes such as mentioned above to mimic Mr. Mohammed Bah Abba’s design more closely, lower temperature drops than I’ve experienced could be achieved.

The other great aspect of this fridge is there’s no moving parts and no components to break down!

Whereas before I could only keep cheese for a under a day in high temperatures (at best), I’ve been able to keep cheese and eggs for 4 days so far thanks to the pot-in-pot fridge; and bread is keeping much longer too.

Bear in mind that the temperature ragne for bacteria growth is 5 – 60C (41 – 140F), the Zeer pot shouldn’t be trusted with particularly delicate foods prone to salmonella, such as chicken and I certainly wouldn’t use it for fish.

It’s also a good idea to ensure food items are wrapped separately or placed in airtight separate containers within the pot. Always sniff test before consumption :).

Where these pots are being used in Africa, people are able to keep food items such as tomatoes for as long as 3 weeks, whereas without the pot tomatoes would only stay good for a few days.

So, if you’re into self-sufficiency looking for a food cooling solution for your outback getaway, or even something to have on standby in case of disaster, consider a Zeer pot – they are cheap to make and cost next to nix to run. Based on clay, sand and water – cooling doesn’t get much more environmentally friendly than this!