I’m not a spider lover, also not a spider hater. As long as they aren’t crawling on me and I can see them, they don’t bother me much. Even big spiders I’ll let roam around my office as they keep other insect pests at bay; which means less insecticide.

The benefits of pest control by insects such as spiders may exceed US $100 billion per year globally. Spider venom is also used as the base for some medicines and the web silk (gossamer) made by spiders is used in some optical devices and is comparable in density strength to kevlar (used in bulletproof vests).

Here in Australia we have some really nasty spiders such as funnelwebs and redbacks, the former’s bite being potentially fatal. We also have far larger spiders which for the most part are harmless – such as the huntsman.

Unfortunately the one in the pic below became infatuated with my notebook and wouldn’t allow me to get on with my work – he’d rear up and when I did manage to catch him and took him outside; he was back an hour later. He was particularly tenacious though. 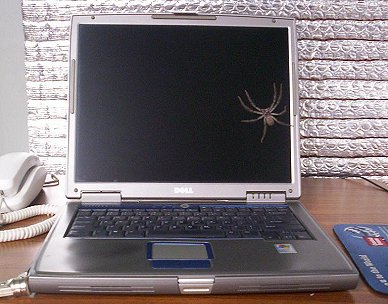 In regards getting rid of spiders, if they aren’t particularly venomous; they are fairly easy to catch – just knock them onto the floor and then quickly cover them with a plastic cup, bucket or bowl. Then just slide thin carboard carefully under the container and holding onto the cardboard, flip the bucket over.

You can also try the same directly on a wall if you have a clear shot. Your spider is then trapped and you can stick him out into the garden.

However, that’s not for everyone; so here’s a very interesting looking invention – the aptly named Spider catcher. 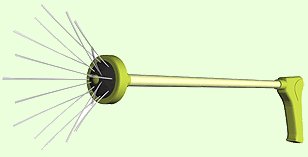 It allows you to reach into corners, under furniture and is long enough to reach the average ceiling. By squeezing a trigger on the handle, the bristles open. According to the company, after surrounding the spider in the open bristle position, release the trigger and the bristles close gently around the spider, allowing you to safely release it outside.

Spider Catcher is not limited to just spiders – it can catch all sorts of other creepy crawlies. My partner isn’t one for the bucket/cardboard trick, so she’s ordered a special “Australian” version of the Spider Catcher for tackling our monster huntsmans – I’ll post up results here soon :). You can learn more about the Spider Catcher here.

Have any ideas for humanely dealing with spiders? Add your tips below!