The general wisdom is we shouldn’t become attached to things, but we do – which may not always be such a bad thing environmentally speaking.

It’s hard to become attached to objects when they don’t last long – and so many products these days don’t endure due to perceived obsolescence (fashion and trends) and planned obsolescence; where a product or components are only designed to last a specific period of time.

My first color TV did last a very long time and has only relatively recently been retired. Actually, it was so old it was my parents’ first color TV too; which was given to me after my parents moved interstate over a decade ago – and it still had a good deal of use since. 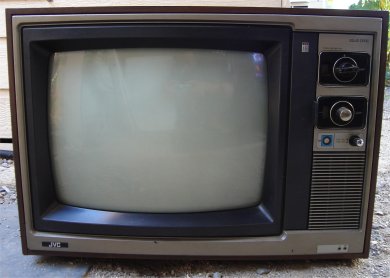 It was a 14/15″ Japanese made JVC color television. It didn’t have a remote, you had to get off your butt to change the channel. Yes, it’s true – they did exist; how we ever survived such a horrid inconvenience is truly mind boggling ;). My parents acquired it back in the days before cable and when we had just two TV stations – and they both shut down by midnight.

It’s hard to put an exact age on it, but trawling through my memories, it’s at the very least 30 years old. Even up until just a few months ago, the picture was great and it had never been serviced that I know of, certainly not in the last decade.

But perhaps it’s good its time has come as the TV’s power consumption was 98 watts. A modern LCD television around the same size uses around half that, perhaps a little less. Still, if a modern TV only lasts a few years, what needs to be considered is the amount of energy and resources that go into production in its overall energy, emissions and resources footprint. Additionally, when you buy a TV these days, you first have to resist those cheap, monstrous big screen sets that chew more than my TV did anyway.

Given it was only used a couple of hours a day at best, I was more than happy to keep using it – not just for the entertainment, but the memories it held. Memories of discovering if the space monster on Star Trek actually did have green eyes as I believed it did while we had a black and white set. Memories of the whole family gathered round of an evening watching British comedies. Memories of my father nodding off in front of it and then snapping back to attention when his head dropped too low. Memories of my mother’s crush on Tom Selleck (in Magnum PI) and James Garner (Rockford Files) that we used to tease her about – a memory even more precious after she passed away at the age of 50.

Yes, we probably shouldn’t grow too attached to things – but that wisdom has more to do with materialism. A different sort of attachment can help us to overcome perceived/planned obsolescence and aside from helping to preserve cherished memories, it can help conserve precious natural resources too.

It’s a shame the TV is far more bulky than my 40 year-old teddy bear, otherwise I’d hang on to it; just for old times sake.

RIP JVC TV… sniff… thanks for the memories …hmmm …maybe I could upcycle or downcycle (repurpose) it! After all, “reuse” is the second most important of the green 3R’s (Reduce, Reuse, Recycle). Suggestions anyone?

The Joneses Must Die